We’ve all been enjoying Farrah Abraham’s hilarious new feud with a former Mob Wives star. But now that Drita D’Avanzo has threatened Farrah, things are sounding a little more serious.

Even Farrah has people who care about her (unironically).

And they’re calling on Farrah to back down and end this feud — before this feud ends her.

A source tells RadarOnline that Farrah Abraham’s friends fear for her life.

"Drita wants to get on a plane to f–k her up," the insider describes.

Drtia said on Instagram that she no longer fights people because she doesn’t want to be put in jail … but that she may make an exception for the former Teen Mom OG star.

"Everyone is telling Farrah to shut up," the source says.

To be fair, though, Farrah is probably accustomed to hearing this message and might not realize that, this time, it’s a little more serious.

Drita, Farrah’s friends fear, is out of Farrah’s feuding league and may not be playing the same game that Farrah is.

The insider says: "This is someone you don’t want to f–k with."

Apparently Farrah’s habit of feuding with other reality stars in order to stay quasi-relevant shouldn’t apply to this Albanian-American reality star.

"No one," the source insists. "Should be bothering Drita."

The worries of Farrah’s friends may be justified, but a little overblown.

The insider describes their fears, saying: "The mob will come after her!"

The more realistic fear is that Drita and Farrah will come to blows.

Us Weekly reports that Farrah is seeking a restraining order against Drita.

But RadarOnline‘s insider says that the friends fear that it won’t change anything, saying: "Nothing will stop Drita from f–king her up!"

And that, we think, may be the risk for Farrah.

This might not escalate to organized crime hits like something that you’d see on The Sopranos if you were old enough for your parents to let you watch it with them.

But Drita has a history of her own, including having been arrested for beating her neighbor over a parking space.

So while Farrah probably doesn’t have to fear assassins, things might go poorly if she and Drita come face-to-face.

The insider goes on to describe how the feud between Farrah and Drita, who apparently seemed amicable when they were actually face-to-face, got started.

"Farrah didn’t get as much attention from the owner as Drita did," the source says.

That sounds like a minor problem for a working celebrity, we suppose. But it definitely sounds like something that would get under Farrah’s skin.

"He thanked Drita," the source explains. "And she heard it wrong."

Honestly? This conflict sounds very on brand for Farrah.

The insider then says: "She thinks who she is."

We don’t know what that means but, you know what? We’re talking about Farrah Abraham. Nonsense like that just sounds right.

That said, we should remember that after Farrah’s recent arrest for attacking a hotel employee, Drita isn’t the only one with a police record.

(Farrah inists that she was never arrested, for whatever that’s worth)

Still, allegedly attacking a security guard at a hotel is a far cry from getting into a brawl with a woman who has her own violent history.

Farrah’s best bet is probably to just clam up, as her friends suggest, and let this feud die.

In part to avoid conflict, but mostly because it’s just the decent thing to do.

Farrah doesn’t need to feud to get the negative attention that she craves. She can always just flash her vulva again. 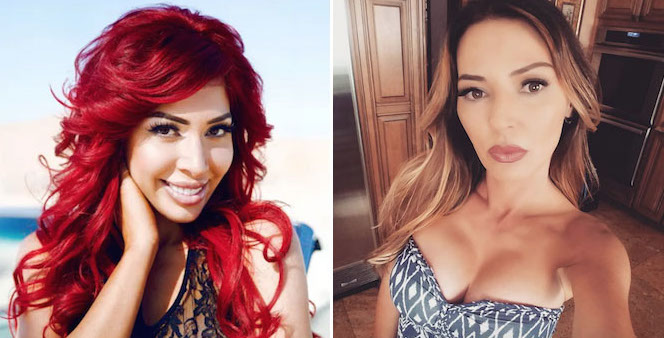 Drita D’Avanzo to Farrah Abraham: I’m Gonna Smack the Sh-t Out of You!