Last week, Farrah Abraham was arrested after allegedly attacking a hotel employee. Police documents suggested that she was intoxicated. It was a mess.

After vowing to never stay at another hotel, Farrah seemed to blame everyone else on the planet for her arrest.

Now, she’s changed her tune … by saying that she was never actually arrested.

Speaking to TooFab on the red carpet, Farrah wants to make one thing clear about her arrest last week.

That is an interesting statement, given that it was widely reported that she was arrested.

Also, that’s usually what it’s called when police haul you away after someone dials 9-1-1 because they believe that you’re committing a crime.

Farrah offers clarification: "I was taken to containment."

That sounds more like a euphemism for someone who doesn’t like to say that she spent time in jail sobering up.

In Farrah’s defense, she does have Sophia with her. Maybe she doesn’t want to get real in front of her 9-year-old daughter.

Or maybe, in her world, this is Farrah-speak for "I wasn’t charged."

Farrah continues, saying that not only was she not arrested, but that she also had not done anything wrong.

"And people lied," she claims. "And said I touched or battered somebody and was trespassing."

Specifically, Farrah was accused of having struck a security guard in the face with her forearm, of grabbing his ear, and of pushing him in the face while he was just doing his job.

As we mentioned, police said that she appeared to be intoxicated.

Farrah then goes on to insist those are things of "which all I’m not guilty of and never did."

If you think that she phrased that a little strangely, get ready for this word salad:

"So everybody else out there, a public form of bullying somebody who is well known," Farrah says. "I don’t tolerate that and I’m much stronger than that."

Everyone’s sentences can get a little jumbled, but this is how Farrah speaks and writes … consistently.

Farrah seems much more eager to discuss a movie project about which she is hopeful.

"I plan on doing my ‘Teen Mom’ film," Farrah says. "So maybe Paramount, it’s a Viacom-owned company, maybe we’ll do a film together."

Farrah accused Viacom of committing "hate crimes" against her, so … she must be in a forgiving mood.

Farrah continues: "That’s what I’m working on, screen writing, the next thing in my career I’m excited for."

See, she is hoping to make a movie out of her book, My Teenage Dream Ended.

TooFab also asks Farrah, because she has been so frank about her cosmetic procedures in the past, which of them was the most painful for her.

"The most painful recently, which I’m not trying to show right now," she says, pretending to hide her face behind her hand. "I was actually taking some filler out of my face."

Dermal fillers are not uncommon, but this may be the first that we’ve heard of someone removing them from their face.

Farrah confesses: "And I actually have a bruise and was trying to cover it up."

Well, we didn’t really see any sign of a bruise on her face. So … good job?

Farrah herself was dressed like a magician for the red carpet.

Farrah had her 9-year-old daughter Sophia in tow.

Some wonder if Farrah brought her as a human shield to force interviewers to moderate their questions. You don’t ask a mom if alcohol makes her violent when her 9-year-old is standing there.

Of course, some wonder if a red carpet event is an appropriate place for a 9-year-old in the first place. That’s a fair question.

But this is Farrah. She’s a legend for questionable decisions. 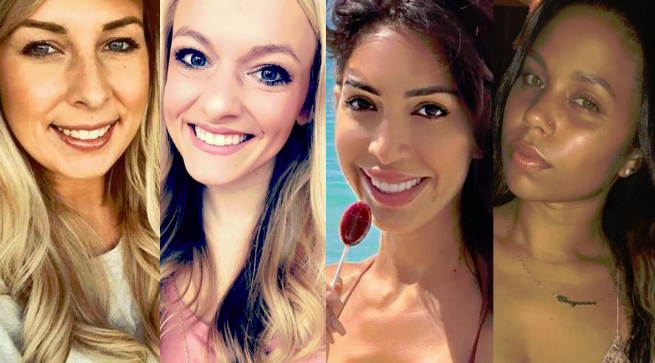 Farrah Abraham’s Teen Mom OG Replacement Announced … and NOT Who You Think!