On the Season 3 premiere of Teen Mom OG, the fab four of the franchise returned with (mis)adventures in love and parenting galore.

Between that and the second half of this double feature, Teen Mom OG Season 3 Episode 2, there’s a lot to catch up on, so let’s recap:

Amber Portwood’s ongoing custody situation with her ex Gary Shirley seems to be all figured out. That’s the good news. The bad news?

Yet another woman has accused her current fiance of fathering a child, bringing his total to seven or eight or nine kids overall (it’s disputed).

His take on it?

"I can’t let that s–t bother me. If I did, it would f–k up my sobriety," Baier said, talking to the producers in true Teen Mom OG fashion.

"Amber and I are brutally honest with each other. The good news is, what more could they possibly say about me? I killed Kennedy?"

All kidding aside, there is always more with Baier. Always.

If he’s so honest, how come fans who watch Teen Mom OG online know how he hollered at Farrah Abraham and Jenelle Evans first.

Amber, meanwhile, seemed to be unaware of this before last night, when it escalated into one of the evening’s most dramatic plot lines.

"F–king weirdo," Farrah said while reading Matt Baier’s old tweets to her. "I don’t know, I just hope she dates better people than that."

You and THG both, Farrah. Hard to argue with that.

Abraham opined that this is the red flag of all red flags, and that if she were in Amber’s position, she’d take a long, hard look at her future:

"I mean, I’d cancel that wedding, that’s for sure."

Farrah ended up talking to Amber on the phone about this, at which point Portwood admitted that things weren’t going great with Matt.

"I asked him about it, and he’s like, ‘Listen, that was a long time ago. I was just telling them they’re beautiful … I wasn’t hitting on them.’"

That didn’t sit well with Amber, because, "I’m like, ‘You told me when we first met that you didn’t know anything about Teen Mom OG."

"And you didn’t know really anything about me, or Farrah, or Maci, but you knew about Teen Mom 2 … so what the f–k is the truth?’"

So at that point, Amber Portwood canceled her wedding to Matt Baier because of Farrah, basically, but they couple is not broken up. Yet.

Fortunately, another wedding is on. Taylor McKinney finally got his act together and proposed to Maci Bookout in epic fashion, no less:

He had MTV producers stage a fake beach "photo shoot" during a cast trip to L.A., giving him the opportunity to get down on one knee!

"Hey, can I ask you something? Will you marry me?" Taylor asked, and her response was about what you would expect after this long:

Good times. Even better was the fact that she reunited with ex-boyfriend and cat murderer Ryan Edwards, and their son Bentley after.

Everyone was thrilled for her … and even more after they learned that Maci was also pregnant with her third child. Quite a week for her!

Meanwhile, Farrah Abraham’s long-suffering boyfriend Simon Saran is back in the fold, though their relationship status is up in the air.

What do we mean by that, exactly?

"I bought an engagement ring that Simon had organized," Farrah lamented to mom Debra Danielsen, one of Simon’s harshest critics.

"I thought he was going to propose, and nothing’s ever happened. I’ve had this ring. Simon still has not paid me back for it."

You can’t make this stuff up.

Simon’s eloquent response was something like: "You women are picky. You like to picky picky pick. Dude, that’s … no … that’s … nice."

Saran later got into a fight with Debra at Sophia’s birthday party after he allegedly posted her mug shot online (again, can’t make this up).

"If you f–k with my respect, it doesn’t make me happy," Debbo said.. "I’ve never once been convicted for domestic violence, or hurting anybody."

Finally, we come to Catelynn Lowell and Tyler Baltierra, who confronted a host of issues Monday night, most notably her severe anxiety.

For the most part, Tyler is supportive, though he did raise eyebrows online when he commented that "I don’t want no heifer for a wife."

Catelynn seemed cool with this, so maybe it’s part of their rapport to include light-hearted fat-shaming; Lowell then joined Weight Watchers.

She summed it up thusly:

All was not well with her, though.

Battling depression and anxiety, she later spoke to Dr. Drew Pinsky on the phone and said she smokes pot twice a day to deal with life.

Given all she’s been through, it’s not surprising. It’s not the best coping mechanism, but one can hardly blame her for struggling so hard.

The mother of Novalee Reign spoke about her troubled past, specifically at the hands of her mother’s ex, who would abuse her physically.

Lowell recalled, "One time, he snapped, and he, like, choked me and pinned me down in the bathroom between the toilet and the tub."

Dr. Drew suggested that Catelynn see her therapist, who she spoke to about some very serious, emotional parenting concerns as well.

We wish her the best, and hope that Tyler continues to have his wife’s back and be cognizant of what she’s going through on a daily basis.

He may be kidding around with his comments, but if there’s anything she needs now, it’s probably not comparisons of her and livestock. 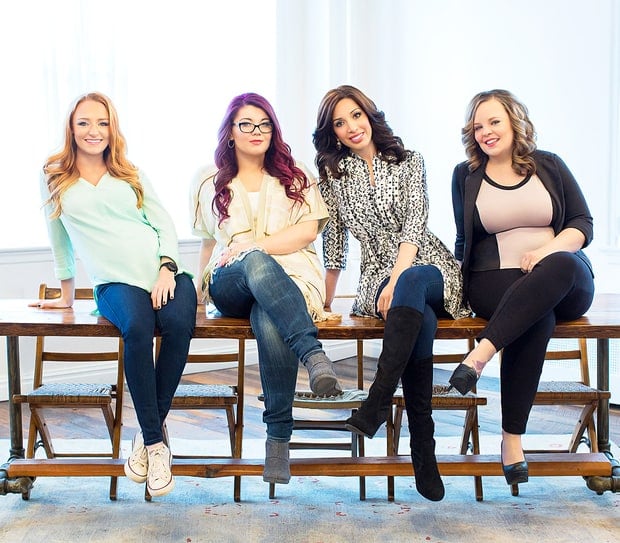 Teen Mom Season 6 Previews: So Much Drama For the OG Mamas!