A lot of compassionate, thoughtful people are understandably concerned about her latest rebound romance.

And so is Farrah Abraham for that matter.

Farrah Abraham spoke to Us Weekly about Amber Portwood and the new man in her former castmate’s life.

"Everyone’s on block," Farrah quickly clarifies, indicating that she does not speak to her erstwhile colleagues.

Of course, why let that stop you from weighing in.

The 29-year-old Abraham then opines, "I think that’s best because I do hear, like, people are still dating wrong."

We don’t disagree, which is wild.

It would be an understatement to note that Farrah is not exactly a person we consider to be a relationship expert.

"I do hear people are not making wise choices," Farrah notes, stating the obvious here. "And that’s kind of scary."

It turns out that, from Farrah’s point of view, what’s scary about Amber’s new relationship is that Dimitri is not from the U.S.

"I do date out of the country," Farrah acknowledges. "I do do these amazing things."

In contrast, Farrah notes "but I’m not having someone come from another country with no Green Card living with me."

“I mean, there’s scary elements to that," she expresses.

Farrah adds: "I think we all need to be aware of that."

We’re not sure that having a Green Card necessarily makes a person safer or more trustworthy. But then, we all know Farrah’s political leanings.

"I’m not trying to hate on Amber," Farrah clarifies.

In fact, she says "but I’m actually concerned for her safety."

"There’s some worries there," Farrah adds.

Interesting that, in Farrah’s mind, it’s scarier for a man to have been born in another country than it is for a woman to be a known domestic abuser.

"Amber is dating him,” an insider confirmed to the celebrity gossip site this month.

“Dimitri has only seen her show [Teen Mom OG] a few times."

The source clarified: "He’s not a superfan or anything; he’s just a guy who happened to watch the show."

"He thought she was pretty," the insider explained, "and reached out to her via social media."

"She’s just getting to know him,” the source noted, like this is totally 100 percent normal.

“They’ve been spending time together at her place. He’s a breath of fresh air."

As for herself, Farrah and her new vagina characterizes her current status as "super single" for the time being.

"I always hope for the best for them,” she says. "I really feel like I have learned so much about dating outside of the show."

"Like, when I left the show, I needed a break," Farrah reasons. "I needed someone to not security blanket me."

"I needed to cut off bad relationships," she adds, "and I’ve invested in myself by reading good dating books."

Let that sentence sink in for a moment.

The idea of Farrah reading really makes us wonder what that experience could possibly be like for her.

You know how Farrah’s rambling, nonsensical Instagram posts often take on the form of a word salad?

What is it like for her to read coherent sentences?

Is she conscious of how differently the rest of the people on this planet we share with her think and speak?

Sorry, we know that this was a tangent, but you have to wonder about people with worms in their brains and how they experience the world.

Dimitri is not the first dude whom Amber’s chosen to bone because he’s an older guy who hit her up online.

She has a type.

Unlike Farrah, we’re not overly fixated on the fact that he’s from Belgium, though we would like to know more about him.

But Amber is the one accused of domestic violence, including a machete attack, just six months ago. And she’s been violent before.

Domestic abuse is a horror, and we hope that both Amber and Dimitri know what they’re doing. 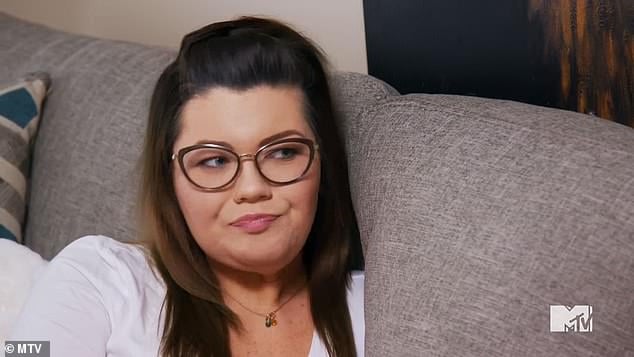 Amber Portwood to MTV: Put My New Stalker Boyfriend on Teen Mom OG or I QUIT!