Britney Spears has been with super hot boyfriend Sam Asghari for about three years now, and fans are starting to wonder, are they are ever going to tie the knot?

For Sam, that’s an easy question as he recently said he "absolutely" sees the "Toxic" singer as his wife one day.

Asghari explained to Entertainment Tonight that he wouldn’t be dating Spears if he didn’t intend on marrying her.

He believes that is the whole point of a relationship and besides, they already consider each other family, why not make it legal?

The 25-year-old added that he and Brit have hung out with his family numerous times and that family approval is not an issue because his mom and all three sisters love her.

Of course they do, it’s Britney, Bitch!

But much to our surprise, their relationship isn’t filled with red carpet events or fancy dinner reservations at Nobu.

In fact, it sounds super normal — imagine something more like Netflix and Chinese take-out.

"What I love the most about my relationship is the fact that it’s so normal," he said.

"It’s not glamorous or anything. She inspires me in my work and I can give so much to her by going to the gym, by going to work, by having a balanced life."

"We can get inspired by each other here and there and really grow with each other," Asghari explained.

Not only does her fitness trainer beau worship her and their happy life together, but he has also stood by her through some trying times.

Like, for instance, Spears’ ongoing battle with her dad Jamie over conservatorship of her multi-million dollar estate.

Britney’s dad has been her conservator since 2008, but as of today he has been temporarily removed due to "medical reasons."

The new temporary conservator is Jodi Montgomery — who Jamie handpicked for the role — and she will be stepping in from now until January 20, 2020, at the earliest.

But Brit is hoping her court-ordered evaluator will prove her stability to win back her life.

I mean, it’s been many years since she was first declared legally incapable to care for herself and if partying too much, shaving your head in front of the press (ok, that was wild), or marrying too many men is a sign of that, then wouldn’t all of Hollywood have a conservator by now?

But on the other side, there has been a positive change in Britney, who has practiced poor spending habits and faced traffic charges, since her conservator was permanently assigned.

She’s had more freedom to focus on her personal relationships, kids, and career — and not so much on finances.

But Britney is ready to take all matters of her life into her own hands.

Her father has had so much control over her through the conservatorship — including decisions like where she can perform, if she can drive a car, where she can live, and yep… even if she can get married!

So before Sam and Brit get too carried away at the thought of saying "I do" and exchanging vows, we hope this conservatorship mess can get settled, quick!

#FreeBritney! is a great hashtag and all, but we’re sure she would prefer to be planning her #WeddingOne! 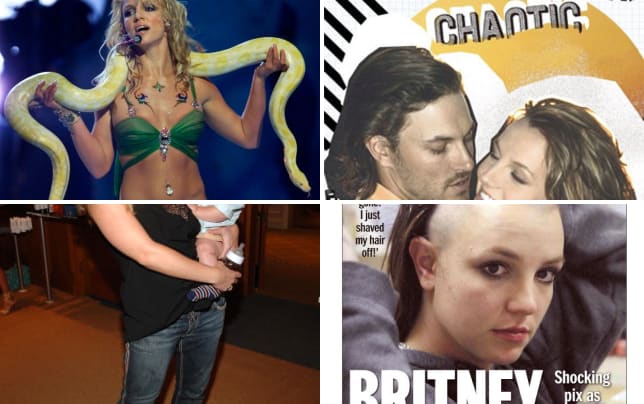