Chris Brown commented on Twitter following the possible attempt on his life Sunday morning which left Suge Knight shot and in the ICU with multiple bullet wounds. 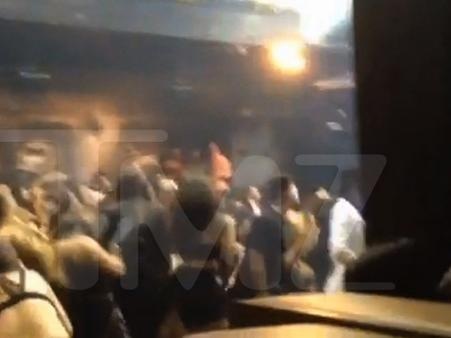 Police are currently investigating whether the West Hollywood shooting was gang related, as Knight, rapper Game and Brown all share ties to the Bloods.

Moments after the shots were fired, Brown was seen climbing onto what appeared to be a bar in the club as a bouncer told partygoers to "Get down!"

"It’s disappointing that we as a society can#t have fun or enjoy ourselves without any altercations sometimes. Miss me with the bullsh!t!!!’ Chris tweeted.

Yes … it’s such a shame people can’t have fun without throwing up gang signs, associating with known gang members and asking for trouble everywhere they go.

The suspected gunmen were reportedly apprehended by police, as officers combed 1OAK for clues and quizzed revelers over the events of the night.

Out in the street, mass hysteria ensued as the club was evacuated, people poured out with their hands up and streets were sealed off by police.

Milan Christopher Gordy, a rapper and VJ who was there, recalled the scene:

“As Suge Knight gets shot … Listen closely you can hear the two gun shots that … wounded him along with seeing Suge knight running for his life.”

“And @chrisbrownofficial on the table in an outrage that people ruined his his pre @VMA event after he is clearly trying to stay drama free this go round.”

He is? By throwing up gang signs? We’ll have to take Gordy’s word for it.

"This is the 3rd time I have seen some1 shot point blank range at so called LA premier night clubs," he adds. "@1oakla will never be there again!”

At least you should probably avoid any parties Chris attends. Witness Katie Clendon aid via her Twitter account that she thought Brown was the target!

"Literally can’t believe what I just witnessed. Someone tried to fire shots at Chris Brown at 1oak. Speechless. Prayers to all those harmed by this."

"Honestly still in disbelief this happened," she said.

Sadly, we believe it pretty easily at this point.