You heard about it for weeks.

You saw the clips online.

You wondered if the fight between Angelina and JWoww could possibly live up to all the hype… and then you were finally provided with the answer on Thursday night.

Heck yes, it could.

On the latest installment of Jersey Shore: Family Vacation, we finally witnessed the fallout from that infamous night in Las Vegas, which aired two weeks ago.

As a quick refresher:

Jenni Farley’s then-boyfriend, Zack Clayton Carpinello, very clearly hit on Angelina while dancing at a nightclub —  while his girlfriend at the time was passed out right nearby.

After Farley witnessed these drunken shenanigans for herself, she broke up with Carpinello.

And yet: JWoww still had quite a few questions last week about what transpired; specifically whether Angelina had kissed Zack or initiated their flirting in any way, shape or form.

This all basically brings us to the explosive Thursday night showdown.

The episode took place almost entirely in a new townhouse the crew had rented for a few days in Jersey, with controversy erupting almost instantly over JWoww and Angelina sharing a room.

Cut to a group dinner.

And all Hell breaking loose.

While getting up to go get a drink at one point, Vinny asked Angelina if she had her nipples pierced. She said yes, but refused to provide the actual evidence.

This prompted JWoww to accuse Angelina of making the piercing up… just like she may have made up her side of the story about Zack.

"How much do you commit to a lie?" JWoww then pointedly asked Angelina, prompting a hilariously loud "OOOHHH!" from those at the table.

The conversation only heated up from there.

"I’m not the one that’s kissing other men, showing my vagina and oiling up somebody else…" Jenni started to say, before Angelina cut her off as follows:

"I would never kiss somebody else, girl! I don’t even think your man’s hot!"

The hightlight of the back-and-forth were easily Vinny’s facial expressions and reactions, as we’ve attempted to capture above and below.

From there, Deena tried again to make peace, but she was unsuccessful, as Angelina took the argument up a notch by shouting:

"What about your f-cking divorce that f-cking happened that you don’t want us to talk about?!"

"Because I respect my kids, and I respect my ex-husband! That’s how you get a divorce!" JWoww shot back, bringing Ronnie into it by pointing at him and adding:

"And you take note, too, motherf-cker!"

By this juncture, only Pauly and Vinny were remaining quiet, as everyone else went at it over various personal topics and disagreements.

Angelina eventually accused JWoww of being "grimy," which REALLY made her angry for some reason.

"You made up a lie about me trying to kiss your boyfriend ’cause you wanna deflect ’cause you’re f-cking boyfriend grabbed me!" Angelina yelled back as she stood up and pointed her finger in Jenni’s face.

Farley slapped her hand out of the way and picked up a wine bottle.

That’s when Angelina picked one up, as well, and producers had to step in.

We weren’t finished just yet, however.

Angelina turned her sights to Snooki, asking why she had sent her nasty, accusatory texts about the whole Las Vegas incident.

Snooki denied this claim, having not even been present for the flirtatious evening — and then lost it on Angelina when she said her fiancé, Chris, almost left her because of the allegations.

"That’s not my problem! F–ck her! She’s so f-cking fake! I’m going home. F-ck you. I’m going home," screamed Snooki as she stormed away.

Nicole was hysterical. She was inconsolable.

The reality star ran downstairs, all the way out the front door, with Jenni and Deena following right behind, as Angelina stayed back and read Nicole’s messages to the boys.

Read one of these texts, from Snooki to Angelina in regard to the night out with Zack:

That’s the last time I’ll let you know the stupid shit you did. Good luck.

"It’s not fair! I’m not a f-cking bad person!" Nicole sobbed downstairs, as Jenni, Deena and producers tried to clam her down.

From there, Vinny tried to give Angelina a legitimate pep talk on how to approach the situation, while Ronnie did everything he could to rile her up.

Dude was royally pissed off, too.

How did the battle royale wrap up?

Did the group even make it outside of the house for another night on the town?

We’ll need to wait until next week to find out! 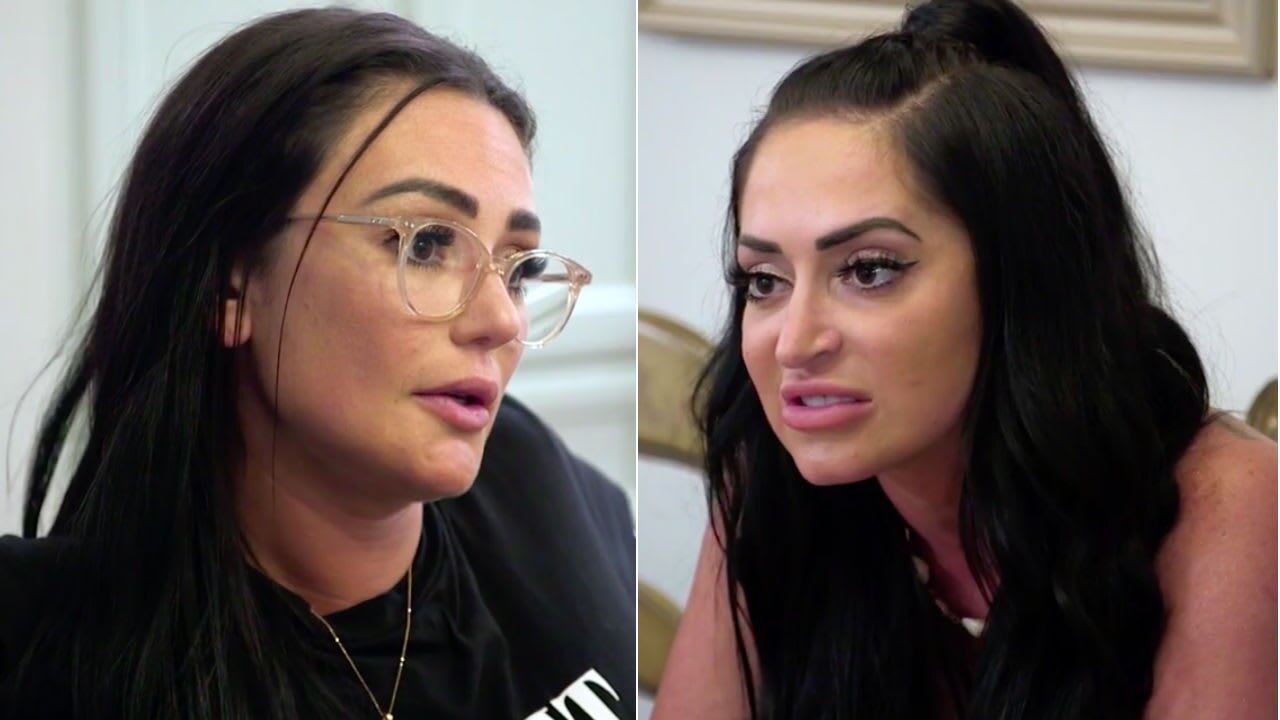