Well, another season of The Bachelorette is almost upon us.

And you know what that means – it’s time to suck the fun out of the experience by prematurely revealing the recipient of the final rose!

Now, we really shouldn’t need to say this, but if you don’t want to know who will win Hannah Brown’s season then read no further.

Yes, The Bachelorette spoilers await. And yes, we’ll repeat it in all caps for the people just lazily skimming through:

SPOILERS FOR HANNAH BROWN’S SEASON OF THE BACHELORETTE LIE AHEAD!!!

IF YOU DON’T WANT TO KNOW WHO WILL WIN, READ NO FURTHER!!!

Now, that that’s out of the way let’s get right into Beast Mode with the woman to fans as Hannah Beast.

Many were surprised by the selection of Brown, who’s certainly one of the most – let’s say quirky – Bachelorettes in recent years.

But production insiders say the dudes in Hannah’s stable don’t seem at all thrown by her idiosyncrasies.

In fact, Brown is currently filming in Scotland with her 12 remaining men, all of whom are said to be fully smitten.

But while Hannah may have brought a dozen guys to the Highlands, in the end, there can be only one.

And it looks as though we may have an idea of who that lucky fella is:

Many have mistakenly taken Steve’s early intel to mean that Parker has already won the final rose and put a ring on Hannah’s finger.

Not the case. As we just said – there are still 11 other dudes in the running. So why is the Oracle of Bachelorette Spoilers so confident?

For one, Luke scored the crucial first impression rose, and his chemistry with Hannah is said to be unmistakable.

More often than not, especially lately, the winner of this critical early test has gone on to win the final rose as well.

So who is the guy who might soon be Mr. Beast?

Well, according to Steve, Luke is an entrepreneur and former college baseball player from Gainesville, Georgia.

Of course, "entrepreneur" could mean a lot of things. Perhaps Luke is a budding billionaire to invented the next big thing.

Or perhaps, as any dating app user can tell you, he could be well short of that … or it could be code for "between jobs."

But hey, whatever he’s got going on, it appears to be enough for Hannah to unleash the Beast … or something.

Obviously, there’s a lot of game left to be played, but it seems Ms. Brown’s fellow southerner currently enjoys a healthy lead.

Hopefully, when the dust settles, Luke is not just handsome and smart, but quirky enough to keep pace with Hannah.

The quirk is strong in that girl.

UPDATE, 4/23/19: Hannah’s final four have been revealed, officially … did the supposed man to beat, Luke make the cut?

Let’s find out. Here they are:

1. Tyler Cameron. You know what they say about not trusting anyone with two first names. You heard it here first, Hannah.

We kid. But seriously folks, he’s a "custom home builder" and former college football player who takes her to Jupiter, Fla.

2. Peter Weber. Not much is known about the pilot from L.A. because his Instagram account is set to private at the moment.

Bad news for those of us seeking inside intel and Bachelor spoilers. Better news for Peter’s reputation and mental state.

3. Jed Wyatt. The 25-year-old musician from Tennessee clearly catches Hannah’s attention, but should she tread lightly?

"He is a player and wouldn’t be surprised if comes across like a douche on the show," one Bachelor fan wrote on Reddit.

"This person said they ran in the same friend group so I’m pretty sure she knows him very well and the type of guy he is."

If Reddit says it, it must be true! (Maybe. Probably not.)

4. Luke Parker. Last but certainly not least, the frontrunner who nabbed the first impression rose does indeed make the final four.

The 24-year-old former baseball player from the University of Alabama is also very religious and charming … so totally her type.

More so than the other three dudes who make it to hometowns? Only one way to find out. (Spoilers, as soon as we have them.) 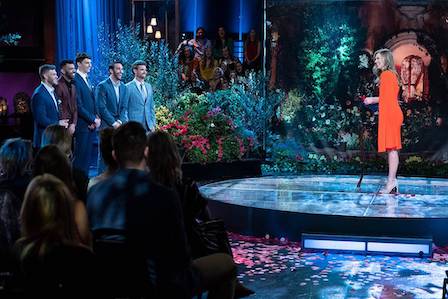