We hate to break this to you, but…

… Josiah Duggar and Lauren Swanson having a bit of fun at your expense.

They know exactly what you are thinking, exactly what websites such as this one are writing and they don’t have any plans to address the elephant in the room.

Or the alleged child in the womb, we should say, to be more specific.

Indeed, every other social media user seems to be convinced that Swanson is pregnant.

This has been a topic of debate ever since she married Duggar at the end of June and fans are so desperate for confirmation that they took Lauren’s recent decision to make her Pinterest page as a sure sign that she’s expecting.

She must have done so because she’s making a few baby boards and isn’t prepared to share the news yet, right? Right?

Probably, according the latest reports.

But don’t expect either Josiah or Lauren to confirm the news any time soon.

"Josiah and Lauren are having fun keeping her possible pregnancy status a secret,” a source tells Hollywood Life, making it sound as if a baby is in there, but…

“They are so happy, in love and excited about this newlywed time in their life that they are keeping everything just between the two of them.

"When anyone asks them directly about being pregnant, they give a vague answer with a smile.”

Hey, look, we’re all about respecting privacy and few things are more special or personal than a baby on the way and…

We’re a celebrity gossip site! Give us all the scoop you’ve got, Lauren and Josiah!

"Lauren and Josiah have been married five months now and it’s no secret that they’ve been trying for a baby since their wedding night so it’s very likely she’s already pregnant,” another source tells Celebrity Insider.

This would certainly fit the pattern of Josiah’s family.

Nearly every Duggar woman or every woman who marries into the Duggars starts trying for a baby within hours of exchanging vows.

For Lauren and Josiah, this occasion took place on June 30 in Arkansas.

Because the couple never revealed their wedding date ahead of time, many followers assumed Swanson was already pregnant and that this was your basic shotgun marriage.

Alas, if that were the case, Lauren would be showing by now.

All this time later, however, even those very close to the stars believe a bun is on Lauren’s proverbial oven.

“Friends and family believe Lauren is secretly pregnant and they are all anxiously waiting for her to reveal her big news,” writes Hollywood Life, adding:

“They are dedicated to their faith and believe when the time is right, they will share the wonderful news with their families first.”

Of late, Swanson sparked pregnancy chatter after she wore a loose-fitting dress in a photo she shared on Instagram.

She’s also been sharing a handful of images that only show her upper body, which has led to some speculate that she’s hiding her growing baby bump.

And she very well may be.

Good luck getting an answer to this question from either half of the couple is all.

Trust us. We tried. And neither Lauren nor Josiah have uttered a word to The Hollywood Gossip about it. 🙁 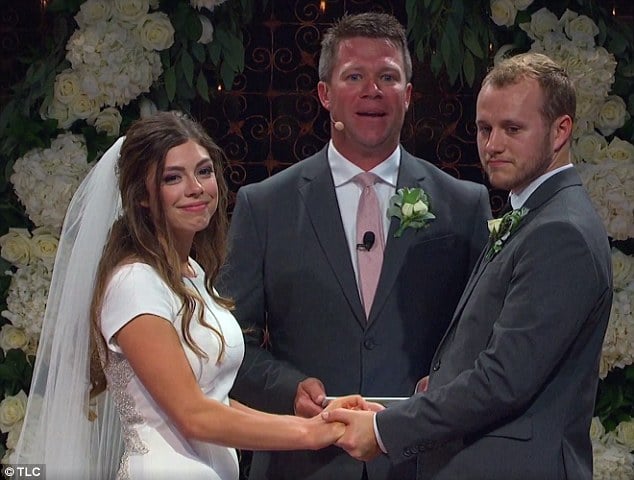