90 Day Fiance: Before The 90 Days Season 4 may be over, but Big Ed Brown is clearly still desperate for attention.

As he clings to fame, his latest Instagram Live video had a pyrotechnic "accident" that absolutely no one is buying.

Bear with us, because even the premise of Big Ed’s latest stunt is farcial from start to finish.

He went on Instagram Live — from which he was rumored to have been banned after inappropriate Live sessions involving minors.

Holding up a legal pad, he begins to read off mean messages that he has received from "trolls."

Obviously, it is transparently absurd to write down mean messages on a note pad instead of reading them from a phone or tablet.

But secondly, Ed has received unkind messages — some unfair, others well-earned — for months, now.

There is no reason to go Live and read this litany of gripes against him … except, of course, to pull this particular stunt.

As Ed reads, he leans forward in what he must imagine is an inconspicuous, natural manner.

On his table, the fire that has served as a Chekhov’s Gun for the duration of this short video finally gets its moment.

The legal pad goes up in flames, and Ed takes an absurdly long time to "notice" the raging fire a foot away from his face.

There are a number of issues with the video that has fans annoyed — and downright angry.

We all know that some celebrities dramatize things to get attention, but this struck many as an excessive way to cling to the spotlight.

Worse, however, was the presence of Ed’s dog, Teddy, who was just a couple of feet away from the flames.

Why did Ed pull this allegedly deliberate stunt, risking himself, his dogs, and potentially even his neighbors?

Well, even if we believed that he went live on Instagram purely to clap back at his trolls, the answer would be the same:

Something clicked inside of Ed when he first rose to fame on 90 Day Fiance, and he doesn’t ever want that spotlight to fade.

This aspect of his personality has reared its head before.

Early in his season, he was doing every interview that he could.

He even went so far as to declare himself the "most authentic" 90 Day Fiance star in the history of the franchise.

That claim earned him widespread condemnation, including from many fellow stars from all across the seasons and spinoffs.

Even stars who do not normally agree or see eye to eye, like Loren Brovarnik and Larissa Lima, called him out on his BS.

His bloated ego was seen by the fandom as particularly unbecoming given his outrageous behavior towards Rosemarie Vega on the show itself.

Ed horrified fans with the way that he approached Rose, a single mom less than half his age who was living in extreme poverty.

He interrogated her about her sexual history. He demanded that she take an STI test while refusing to do the same.

Ed insulted her body hair and wrongly accused her of having poor dental hygiene.

Ed knew from the start that he wanted a vasectomy, not more children.

But he waited to tell Rose that until he had already wasted so much of her time. When Rosemarie ghosted, he acted sad.

Ed has defended himself every single time using the same excuse: he says that he’s dumb and says dumb things.

Far be it from us to dispute that, but that excuse is getting old.

He has probably relied upon that self-deprecating humor and his appearance in order to shift blame and quell people’s anger for his entire life.

In reality, of course people screw up sometimes. They say the wrong thing, they do something foolish. It happens.

But in Big Ed’s case, he seems to repeat the same mistakes again and again, whether it’s being rude to Rose or inappropriate on social media.

Sooner or later, the "mistakes" are no longer mistakes — because if he truly wanted to stop making them, he would have.

But Ed seems to care less about fixing his mistakes and more about seeing his name in headlines and seeing the adoration of fans.

He seems to genuinely like interacting with random strangers on Instagram, something that has encouraged fans to be more vocal.

Some of those fans have been teenagers or younger.

This has earned Ed nicknames like "Big Pred" and "Big Ed."

It hasn’t helped that Ed was accused of sexual assault by a woman who says that he groomed her and is now trying to silence her.

And we have all heard about Ed’s creepy texts to Juliana Custodio, a fellow 90 Day Fiance star who is very happily married.

Whether Ed pulled his fiery stunt on purpose or it was a highly improbably accident is moot.

He needs to stop acting like a buffoon on social media and straighten up his actual, real-world behavior.

Ed wants to be seen as a lovable comedic figure like Danny DeVito.

Instead he is acting like Danny’s It’s Always Sunny in Philadelphia character, Frank Reynolds.

Stop chatting with minors. Stop recycling the same excuse when you act up. Stop setting things on fire around your dog. 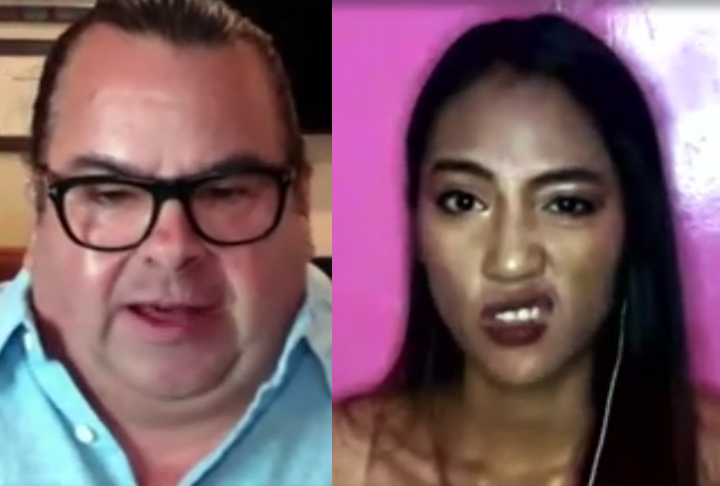 Big Ed Brown Tried to Pay Rosemarie Vega to Strip Down on Camera!