Upcoming 90 Day Fiance: Before The 90 Days star Geoffrey Paschel has been accused of a brutal, violent attack by his ex-girlfriend.

That is just the tip of the iceberg. He faces similar accusations and worse from two ex-wives.

WARNING: this article includes discussion of allegations of domestic violence and sexual assault. Please read at your own risk.

Geoffrey Paschel is a 42-year-old man from Knoxville, Tennessee. His fiancee is 30-year-old Varya, from Russia. He was born in 1977.

Fans are hoping that Varya dumps Geoffrey and stays in Russia if she has not already.

Fans also hope that TLC scrubs any footage or mention of Geoffrey from the upcoming 90 Day Fiance: Before The 90 Days season.

We previously reported that Geoffrey’s ex-girlfriend, with whom he was living at the time, accused him of a monstrous physical attack this past summer.

She describes him ambushing her in her home, where he had been staying with his young son.

In her court filing, she noted that the attack continued for 30 minutes, and that one could retrace the steps through her home by the damage and blood smears.

After he allegedly prevented her from using her phone to call for help, she courageously fled the house and called 911 from a neighbor’s home.

That, it turned out, was just the beginning.

Basically, celebrity gossip website Starcasm has been doing the background research that TLC should have done.

Geoffrey has been married four times, to four different women.

Geoffrey is still legally married, with a divorce pending. His fourth wife accuses him of abuse and fled with her children to Canada.

Geoffrey and his second wife were married in 1998 (when Geoffrey would likely have been at the end of his teens).

It was actually Geoffrey who filed for divorce in 2004, citing "irreconcilable differences" claiming that she was guilty of "marital misconduct."

He cited that she had been charged with child abuse and neglect and drug possession during a single instance.

But in court, her filing said that the child abuse and neglect charges stemmed from leaving her 5-year-old in the car while running into a building.

She maintained that she had kept eye contact on her child throughout that time. She was arrested after someone spotted the 5-year-old, however.

Officers also charged her with drug possession and possession of drug paraphernalia in that instance.

But what she had to say about Geoffrey was much more alarming than her defense of herself.

Geoffrey’s second wife’s response to his divorce filing accused him of a litany of violent attacks.

"Specifically the Counter-Defendant [Geoffrey] is guilty of various physical assaults upon the Counter-Plaintiff," court documents read.

These were attacks "which have been documented through Orders of Protection and medical records."

“The most recent assault against the Counter-Plaintiff occurred during a visitation on Saturday, December 18, 2004," she noted.

Her rssponse filing continued: "At which time Counter-Defendant was charged with domestic assault and an Order of Protection has been filed."

According to the documents, Geoffrey "has committed assaults against the Counter-Plaintiff in the presence of the minor children."

Also to our horror, Geoffrey is accused of "committing acts of violence towards the minor children themselves."

"Counter-Defendant has repeatedly raped the Counter-Plaintiff," his second wife — the survivor in question — cited.

"Counter-Defendant has further threatened the lives of Counter-Plaintiff and her family numerous times," court documents read.

"Counter-Plaintiff fears for her safety," docs admitted, "in the event that she should respond to Counter-Defendant’s legal proceedings in any manner."

That makes three exes accusing him of the same horrors. It is a damning indictment of our justice system that Geoffrey is alive and free.

Many would argue that it says a lot about TLC and Sharp’s vetting practices that Geoffrey ever filmed for the show. 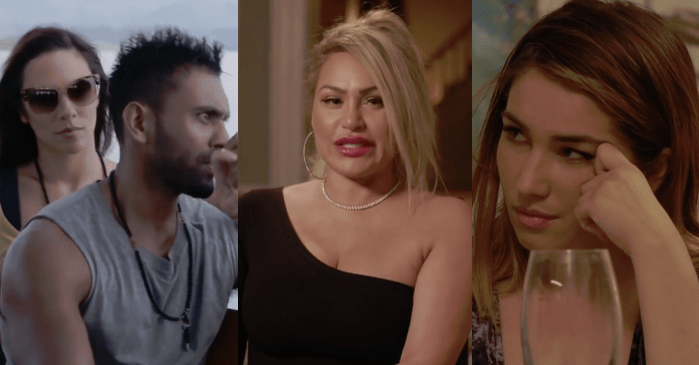 We will keep Varya in our thoughts, but also Geoffrey’s exes and children. We hope that they are all safe at this time.