By now, you’ve probably heard the not-at-all surprising news that Jenelle Evans has filed for divorce from David Eason.

As expected, the split quickly turned ugly with Jenelle accusing David of abuse, and David threatening to expose Jenelle’s secrets and lies in court.

Evans filed for a restraining order against Eason not long after she fled the property they once shared.

So now, David is forbidden to contact her in any way — but of course, that’s not stopping him from trashing her on social media.

David’s platform of choice is Facebook, because of course it is.

While his lawyers have almost certainly cautioned him against discussing his divorce at all, let alone online and publicly, it seems Dumbass Dave has opted to ignore their advice.

Without mentioning Evans by name, Eason has been making jokes at her expense and threatening to ruin her reputation in court.

This seems like an objectively bad idea, but since David is probably damaging his own case here, we suppose we’re in favor of it.

We guess. That’s very hard to say. It’s like being stuck between a rock and the proverbial hard place, whatever TF that means.

Speaking of support, David seems to think the public is 100 percent on his side … which would certainly be a first.

We can see how he might have arrived at that ridiculous conclusion – after all, Jennelle not particularly well-liked on the internet.

But David literally murdered a puppy this year, and he stands accused of abusing his stepchildren and threatening to force-feed severed body parts to his wife.

Not the kind of behavior that wins you a lot of fans online – but don’t tell that to Eason.

"My fans make me smile so much I need to rest my face for a minute," David wrote on Facebook this week.

"Thank you so much to all the positive people sending so much love and support my way!"

Well, if the accusations are accurate, David definitely knows a thing or two about making faces hurt, but they’re usually not his own.

For once, Jenelle is doing the right thing and attempting to keep her drama off social media for legal reasons, a decision she addressed (somewhat ironically) in her divorce announcement:

"I’ve mostly kept off social media the past few days because I’ve been focused on making some big life decisions."

"I’ve lived my life on camera since I was 17 years old. And alot of it hasn’t been pretty. But its been my life," she added.

"Like anyone else I want what’s best for my kids and I want to be happy."

Since then, Jenelle has said very little about her separation, preferring instead to post pics of her kids, like this photo of 2-year-old Ensley.

In her restraining order request, Jenelle stated she suspects David will use social media to try and intimidate her.

"Given his actions and knowing his temperament, I believe he was implying that he would kill himself if I do not come back to him."

"For all of these reasons," Evans concluded, "I’m afraid that David will harm me or my children, and that he will continue to threaten me using text messages, phone calls or on the internet."

Scary stuff. And even scarier? We believe her.

Maybe David Eason, in what would be the pinnacle of irony, is making up for years of being an awful husband by proving her right. 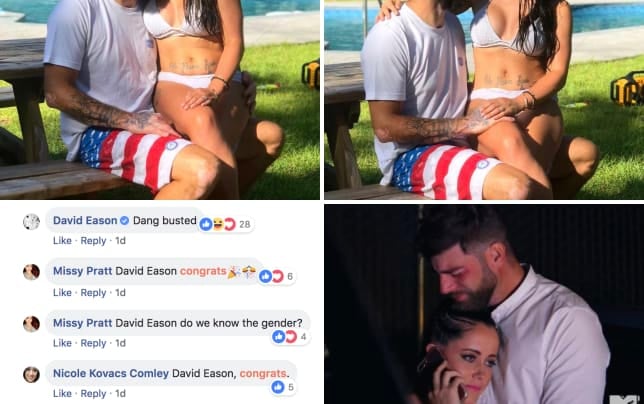