It’s been seven months since Jinger Duggar moved to Los Angeles with her husband, Jeremy Vuolo, and her daughter, Felicity.

The family relocated so that Jeremy could pursue a degree from a divinity school in the area, which sounds like a pretty wholesome reason to move.

But Jinger’s parents weren’t happy to learn that their daughter would be taking up residence in what they believe to be a bastion of godless liberalism.

In fact, there was a time when it was widely rumored that Jinger had been disowned by her parents.

That sounds a bit severe, but the Duggars are nothing if not extreme in their beliefs.

Whatever the case, it now looks as though Jim Bob and Michelle have overcome their outrage over their daughter’s decision to relocate to the land of kombucha, talk show tapings, and other playthings of the devil.

It’s Jinger’s first appearance on the page since her move out west.

"SO thrilled to be in California spending time with @jingervuolo!!" Michelle captioned the pic.

Obviously, this is a pretty big deal for a number of reasons.

For starters, Jim Bob and Michelle rarely leave the Compound for any reason, and when they do, there’s usually a paycheck involved.

Fortunately, in this case, it looks as though they didn’t make the treacherous trip to Heathen Territory for the sole purpose of reconciling with their wayward daughter.

Insiders say the reunion is being documented by a TLC camera crew, which means the Duggars are getting paid, which means they’re that much more closer to securing VIP seating in heaven.

And it looks like Counting On execs were forced to shell out for quite a few boarding passes, as Jim Bob and Michelle did not make this trip alone.

In fact, it seems they were joined by a whopping 16 of their children.

So who made the journey?

Well, just about everyone … including Josh, for some reason.

(Dude just insists on hanging around and making the show’s post-production crew edit him out of scenes.)

As for who was left behind like heathens after the rapture — well, based on her latest Instagram activity, we can tell that Jill Duggar did not make the trip.

She posted the above pic of a neighborhood party while the rest of her family was in LA.

At first, much was made of the fact that this, as there have long been rumors that Jill is estranged from the rest of her family and her husband, Derick Dillard, is feuding with Jim Bob.

On top of that, the Dillards have not participated in filming ever since Derick was fired from Counting On back in 2017.

Both of those factors may have been involved in Jill’s decision to sit this one out.

But she wasn’t alone in remaining behind in Arkansas.

Joy-Anna Duggar and Austin Forsyth also stayed home, a fact revealed by Joy’s comment on the pic of Michelle and Jinger:

"Y’all are so pretty!! Sooo wish we could be there!!" she wrote.

At least we hope it was her that wrote the comment, and not her husband.

Y’all need to stop with these confusing-ass joint accounts!

Anyway, we assume you can look forward to watching the Duggars make their way through LA armed with rubber gloves and defensive crucifixes on a future episode of Counting On. 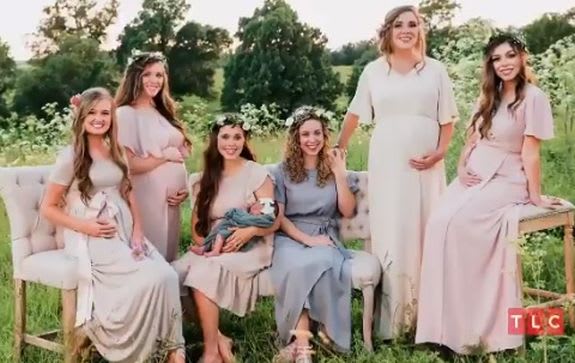 Counting On Sneak Peek: Jinger Duggar’s Rebellion, A Tragic Death, And MANY …