Nobody knows how to have a good time (and then get arrested for it) like Florida Man.

But if you’re looking to liven up your summer pool party, definitely don’t invite Christopher Monnin.

The 35-year-old Floridian was arrested for stealing dozens of pool floats around the Palm Bay area. Why pool floats? Well, to have sex with them, of course!

According to the Miami Herald, the Palm Bay Police Department suspect Monnin is behind a whole crime wave of missing pool toys.

An estimated 13 cases of stolen floats have been reported in the Palm Bay area just this year.

"The city has been plagued with burglaries," police told the Herald,

During these burglaries, police explained, "the suspect cuts the screen or otherwise enters a victim’s back pool deck area and steals only pool floats."

That’s right, only pool floats. Florida man knows what he wants, and he wants a lot of it.

According to the affidavit, Monnin broke into some of the homes multiple times, but residents didn’t report the theft to Police until the second or third instance.

Police finally stopped Monnin as a suspicious person on Thursday, June 13, around 1:30 in the morning.

At the time, Monnin was riding his bike down the steet with a white garbage bag full of deflated pool toys.

At that point, it was a pretty safe bet that police had apprehended the correct culprit.

To his credit, Monnin confessed quickly during questioning, stating that he had stolen "many floats."

Monnin added that he had been storing the stolen pool floats at a vacant house across the street from his own residence.

We’d love to tell you that Monnin was simply gearing up for the pool party of the century, but this man does not have a pool, and the reality is much darker.

Monnin allegedly told police he "sexually gratifies himself with the floats." According to Monnin, he "does this instead of raping women."

This mind-boggling admission only raises further questions, such as, WTF, Florida man?

In what way is a pool float a substitute for a human woman? What kind of floats has he been stealing? Does he have a type?

We’re not sure we even want to know.

This man was keeping a veritable harem of inflatable mates.

Monnin’s collection of pool toys could fully stock the outdoor department of a store that only sells things no one should ever touch again.

Police found several distinctive floats among Monnin’s ill-gotten collection, including a large yellow duck, and a float shaped like a piece of bacon.

He also had a float shaped like a sliced watermelon, and a Shaquile O’Neil branded inflatable lounger, along with other lounge chair style floats.

Monnin, already an ex-con with a history of burglary, may have topped his rap sheet with this ridiculous and troubling crime spree.

But at least he was cooperative with police, and thankfully, he is not accused of actually raping any women.

Monin was ultimately charged with burglary of an occupied dwelling, petit theft, and criminal mischief.

He’s currently being held at Brevard County Jail, where his bond sits at $16,000.

Monin’s reign of madness may have come to an end, but there’s plenty of summer time left for mre shenanigans from the Sunshine State. 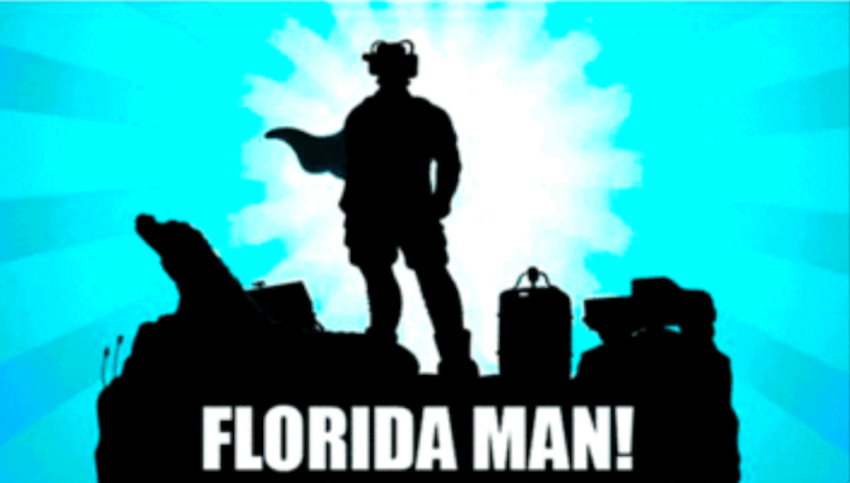