Throughout her years on Teen Mom: OG, Farrah Abraham set the bar pretty high in terms of drama and truly absurd behavior.

But believe it or not, the reality-star-turned-porn-star-turned-celebrity-boxer may have topped herself in her long-awaited return to television.

As you may have heard, Farrah recently appeared on Face the Truth, a new syndicated talk show in which D-list celebs and other unfortunate souls volunteer to have their lives picked apart by a panel of hosts.

Why would anyone submit themselves to this sort of treatment?

That’s a great question that we’re not 100 percent qualified to answer, but we would assume it’s for roughly the same reason that you hate Facebook, yet continue to post non-stop status updates:

It’s 2018, and now more than ever, negative attention is better than no attention at all.

Anyway, Farrah’s estranged mother, Debra Danielsen, also appeared on the show, and it seems Deb is convinced that her daughter is on all the drugs.

If you’re wondering how she may have gotten that impression, please watch any existing video clip of Farrah, and you’ll immediately understand.

Farrah, of course, denied the allegations, but unfortunately for her, it’s quite easy to definitively determine if someone is on drugs.

And so, tests were conducted, and to the surprise of absolutely no one, Farrah had barbiturates in her system.

Of course, Farrah subscribes to the Trump theory of reality, which holds that there is no objective truth, and if you can successfully deflect blame onto a rival, then you can never be guilty of anything.

And so, Ms. Abraham gave a long, rambling, extremely Farrah-esque interview in which she blamed FTT host Vivica A. Fox for tampering with the test results:

"I was just actually more disappointed in the press that Vivica had to do in order to get press for her show," Farrah told Radar Online.

"She’s like, ‘Oh, people are sending in letters,’ No. You have a fake audience, you attack women, your advice isn’t even credible that you’re giving someone as I do go to therapy, I do have family therapy ongoing with my mom.

Farrah went on to make wilds claims about her own health that can only be described as "Trumpian":

"I take it upon myself to have the best health to not have anything in — anything my doctors give me. Their drug test was false. My doctors all looked at everything they gave me, there’s no Barbiturates in there.

"Vivica’s been on reality TV herself so I guess if she wants to say that I’m trash — I work my a– off. Like, I’m filming 24/7 right now, I’m sick, I’m on a reality TV show set nonstop, and I don’t stop working," Farrah continued.

"That’s way more drive and way more hard work than a TV talk show where you should up and you do fake talk TV and cause fake problems."

Vivica has yet to publicly respond to the accusations, which is probably for the best.

For one thing, what we saw on the show speaks for itself.

On top of that, this is Farrah we’re talking about, which means roughly half of what she said makes no sense at all.

Plus, Farrah needs a celebrity boxing opponent, and we’re sure she’d love to lure Vivica into that mess. 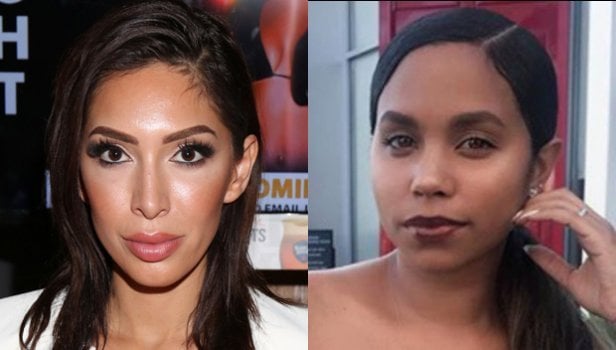