Sunday was Mother’s Day, and like so many other celebrities who wrote tributes to their moms, Ivanka took to Instagram to architect a post of her own.

But she’s being slammed in the comments — even by people who seem to like her — for her brief, impersonal post about Ivana.

Is she deliberately giving her mom the cold shoulder?

Alongside an image of Ivana Trump, her mother who is one of Donald Trump’s ex-wives, Ivanka writes:

“Happy Mother’s Day to my amazing mother and the best skier I know!”

She follows that with a double heart emoji and a “#MothersDay” tag.

This was the accompanying image:

A number of commenters weren’t exactly overcome with emotion when they saw this glamour shot of Ivana or when they saw her daughter’s message.

“That was a weak Mother’s Day wish. Ivana, you deserve better than that.”

“How nice… but I’m sure she has some pretty amazing attributes as a mother than just being the best skier.”

“You are who you are because of her. She deserves more honor. Happy Mothers Day all!”

“Your dad should’ve been a better husband to her.”

Some of those are more political than others, obviously.

We included this image, because seeing it may highlight the brevity that alarmed so many commenters.

For a comparison, let’s look at Ivanka’s sister, Tiffany Trump, and the post that she made to her mother, Marla Maples.

“Happy Mother’s Day! [double heart emoji] @itsmarlamaples I love you with all of my heart and I’m so grateful for all of your love!”

This caption accompanied a digital collage of photos of Tiffany and Marla:

Tiffany’s post is nearly as terse and frosty as Ivanka’s, but the photo collage is much more personal.

So perhaps it runs in the family?

At the same time, we should consider that even some of the criticisms that were not overtly political may have been politically motivated.

After all, it’s not like Ivana Trump has hordes of eager fans looking to defend her honor.

Rather, when someone is the daughter of the most hated man on the planet and plays an active role in his policies, everything that she does looks like a mistake.

That is understandable — the Mueller investigation is trudging along, but the wheels of justice move slowly.

Entertaining revelations about Trump, Russia, and Stormy Daniels aren’t really enough to distract from the waking nightmare of every day’s news.

People are looking to vent, and when the First Daughter can’t seem to synthesize enough human emotion to publish a personal Mother’s Day message, that’s as good of an opportunity as any other.

Ivanka and Tiffany’s Christmas video was much, much better than anything that they had to say about their moms.

In Ivanka’s defense, she and Jared are very busy at the moment and, in fact, they’re overseas.

In her … offense, we suppose … she and Jared are in Israel to oversee the deeply controversial moving of the US embassy from Tel Aviv to Jerusalem.

This is seen as an insult to the Palestinian people, but some evangelical Christians believe that Trump is fulfilling biblical prophecy and ushering the world towards the End Times.

(Hey, both sides of the aisle agree that Trump is leading the world towards its destruction! A rare moment of unity, we suppose)

In the mean time, dozens of Palestinian protesters have been killed by Israeli snipers and countless others wounded.

In that context, Ivanka’s icy Mother’s Day post is sort of the least of people’s worries. 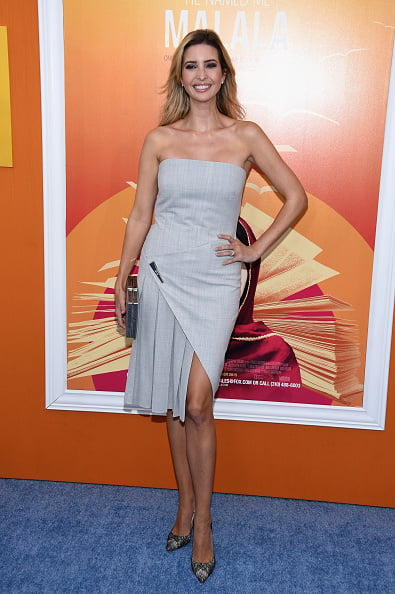