In a sit-down with France’s Numéro magazine, he discussed what it was like that one time he was a total vampire. Like, total.

In the interview, Jaden said, "During a period of my life, I was Gothic."

That in itself seems to be a regular phase of … well, somebody’s childhood, but you need to keep in mind that weird old Jaden Smith was likely the offspring of a Thetan god and was born on a spaceship, and isn’t a regular kid at all.

"I was only wearing black and I was hiding from the sun because I was a vampire."

Yeah, you heard that right – he was a real-life vampire, y’all.

"I was a vampire, for real," he claimed. "I could not expose myself to the sun, and I was only wearing black trench coats."

Li’l Jaden was apparently misled at some point in his life, because we all know that vampires don’t wear black trench coats; real vampires sparkle in the sun and only don designer threads.

He’s not a vampire, anymore, though – Jaden’s just a normal kid these days, and no mention was made about drinking blood, which, in itself, would lend credence to the idea that you might be a night-stalker with an insatiable thirst for mammal serum.

"I open myself up to wear brighter things," he said, and claimed that he’s no longer a vampire. "[I] go out in daylight. I share much more mixed energy."

Just how normal is Jaden Smith now? OMG, like, so normal.

"There are odysseys in which I am engaged now, those I can put in place if I want, [as well as those] I could undertake in the future," he revealed.

"Some immerse themselves in painting, studying intensely, or demonstrate extreme concentration," he said. "The adaptability of the human seems endless, until the day they die."

Boy, he was a vampire and he has a loose grasp on the human condition. Who wants a cookie? Does Jaden want a cookie? Have a cookie, Jaden.

Apparently, the human adaptability with this one is so great, he can change himself from human to a harbinger of eternal night during adolescence. 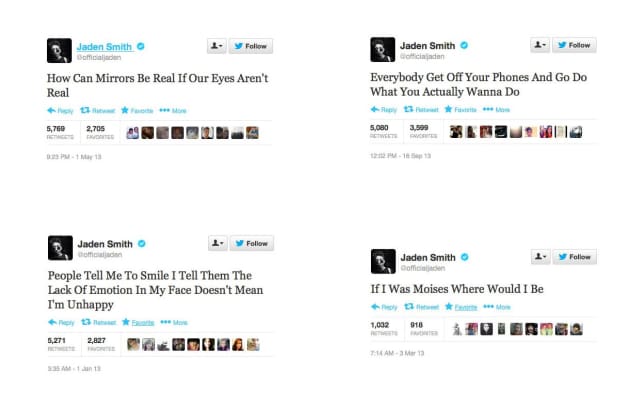