Another day, another reminder that Donald Trump is the most misogynistic presidential candidate since Franklin Pierce advocated chaining alehouse wenches to their sandwich-making stations during the election of 1852.

The past week has been filled with shocking examples of the candidate’s blatant disrespect for women, beginning with footage of Trump boasting about acts of sexual assault in a conversation with Access Hollywood‘s Billy Bush.

Now, more damaging video has emerged in the form of a 1997 Trump appearance on the Howard Stern Show, in which the real estate mogul compares avoiding sexually transmitted diseases as a promiscuous bachelor in New York to serving in Vietnam:

“It’s amazing, I can’t even believe it. I’ve been so lucky in terms of that whole world, it is a dangerous world out there," Trump said, when asked about his dating life and his bill of health.

"It’s like Vietnam, sort of. It is my personal Vietnam. I feel like a great and very brave solider.”

Yes, the man really compared not getting herpes to serving in the Vietnam War.

Obviously, he was joking, but we’re sure there are plenty of vets who fail to see the humor in his comments.

Trump’s avoidance of military service during Vietnam has already been a source of controversy during his campaign, and the candidate has an appalling history of disrespecting veterans.

Early in his run for office, Trump stated that he believes Senator John McCain is "not a war hero," as he was captured and imprisoned during his service.

"I like people who weren’t captured," Trump told an astonished crowd.

The new footage couldn’t have come at a worse time for Trump’s campaign, as many are beginning to believe that his behavior toward women over the years has been even more despicable than previously thought.

In the past week, 11 women have come forward to accuse Trump of sexual assault, describing incidents that took place in different decades and in locales as varied as a flight to New York and the living room of the candidate’s Palm Beach estate.

Though the interview with Stern took place in 1997, Trump was already in his fifties at the time, and the clip has racked up tens of thousands of views on YouTube in just the past few hours.

"Every vagina is a landmine, we’ve both said that," Stern said to Trump at one point in the interview. 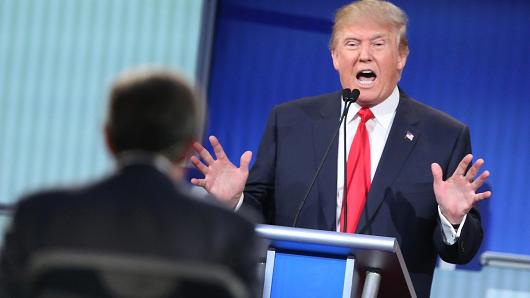 It’s not shocking to hear that sort of comment from Trump these days, but for millions of Americans, it remains disheartening to hear those words coming from a major party’s presidential candidate in 2016.