If you weren’t one of the 118.5 million people to watch Katy Perry’s Super Bowl halftime show, then you missed some spectacular sights:

There was Katy riding a giant mechanical lion, the triumphant return of Missy Elliott, and of course – Katy’s dancing sharks.

The sharks became a phenomenon all their own following their polarizing debut as Katy’s backup dancers. In fact one of the sharks – Scott Myrick – has become something of a web celebrity in the days following the big game.

The sharks are determined to enjoy every second of their 15 minutes of fame, and who could blame them? Last night they sat down with substitute Late, Late Show host John Mayer for the most tight-lipped interview since Bill Cosby on NPR:

The sharks’ handler had to remind Mayer that they don’t talk, just dance ("They’re Super Bowl sharks," he pointed out.), but the above video is highly entertaining, nonetheless.

More important than the actual interview, however, is what this means for Mayer and his on-again, off-again flame Katy Perry.

Perry and Mayer got close after the Super Bowl, which sparked rumors that they’re back together as a couple.

Does this interview serve as yet another clue that the A-list pop stars are an item again? Of did Mayer just want to sit down with the sharks of the hour? You be the judge. 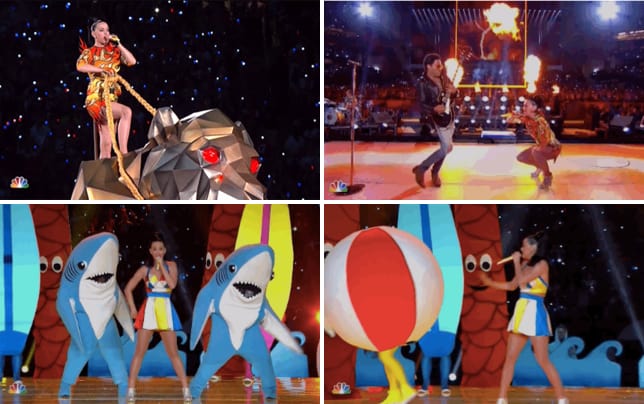