Considering the way Tom Brady’s balls have dominated the news cycle for the past week, you may have forgotten that there’s a football game to be played on Sunday.

#DeflateGate has served as evidence of just how weird our nation’s press coverage can get (particularly when you throw the Internet  into the mix).

Marshawn Lynch’s begrudging appearance at Super Bowl media day today served as yet another reminder that pro athletes and sports reporters are locked in a dead-heat to see who can be the most ridiculous.

If you’re not familiar with Lynch, he’s a beast of a running back, but kind of a jackass as a human being.

His history of bad behavior dates back to when Lynch ran a woman over and fled the scene during his time with the Buffalo Bills.

Five years later, Lynch’s behavior is much less harmful, but no less idiotic.

Already in hot water with the NFL for his refusal to speak to the media and his fondness for making "obscene gestures" on the field, Lynch was reportedly threatened with $500,000 fine if he didn’t show up to today’s press event.

So he showed up. And proceeded to give the exact same answer 25 times:

"I’m just here so I don’t get fined," Lynch warned the reporters on hand. "So y’all can sit here and ask me all the questions y’all want to. I’m gonna answer with the same answer."

He wasn’t kidding. Beast Mode proceeded to say, "I’m here so I won’t get fined," in response to every single question.

Some members of the press expressed their frustration on Twitter, but really – weren’t they kinda playing ball by continuing to ask him questions?

Say what you will about Lynch, if it weren’t for him, we wouldn’t have this nugget of YouTube gold:

Sadly, he won’t be remembered as the source of the most epic Super Bowl XLIX quotes. Take it away, Tom: 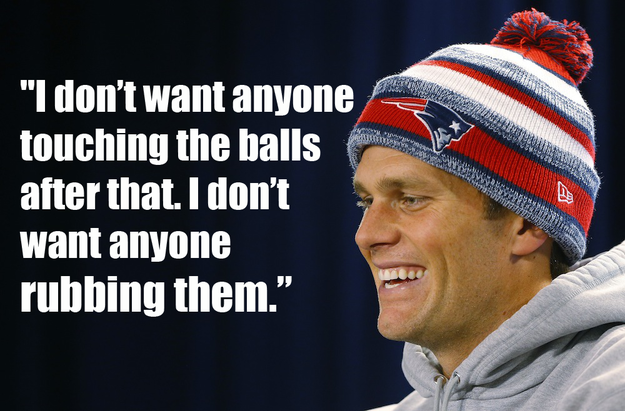