The online community came together as one over the weekend in order to mourn singer and prolific YouTuber Christina Grimmie at VidCon.

Grimmie, of course, was a contestant on The Voice and was building a solid career for herself… when tragedy struck.

She was approached by a supposed fan after a concert in Orlando on June 10 and then shot to death.

According to various sources, her killer – Kevin James Loilbl – was a deranged supporter who believed Grimmie to be his soulmate.

He was wrestled to the ground by Grimmie’s brother before turning the gun on himself and committing suicide. 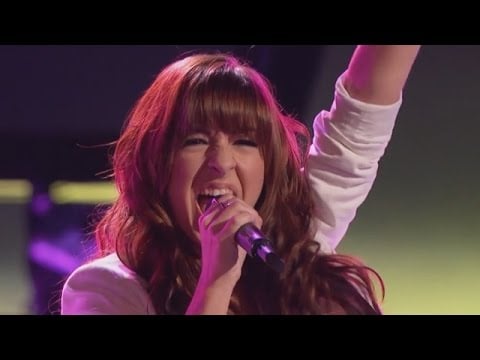 Christina Grimmie on The Voice: A Musical Montage

At VidCon, hosts Hank and John Green introduced the followig video at the Anaheim Convention Center and then called for a round of applause instead of a moment of silence to honor the late performer.

"Her innovation and her generosity will affect this industry and this community forever, and I’m proud of that,” Hank said, fighting back tears.

“Her memory will always be with us, but a bunch of her friends reached out to us because they wanted to share a tribute that they were putting together for her memory."

Her first manager was actually the step-father of Selena Gomez.

The footage below  features numerous YouTuber stars and friends singing one of Grimmie’s songs, “With Love,” as a montage of the 22-year old’s life on camera flashes in front of us.

"I don’t have anything to say, I don’t have words still and it’s a good and bad thing," Grimmie’s brother said on stage at VidCon.

"All I’m going to say is thank God for the mark that she left on this world. Thanks mom and dad I know it’s going to be really tough for us to move forward.

"All the rumors are true that when the gunman came…her arms were open.

"That’s how she treated everyone she knew, her arms were open for them. So thanks again for coming out you guys, and I love you Christina."