In case you were concerned, Little People, Big World fans, Amy Roloff would like to offer some assurance:

Yes, she says in a new interview.

The wait was very much worth it.

Last Saturday, the mother of four married long-time boyfriend Chris Marek, about a year after the couple had planned to get hitched.

Unfortunately, Covid-19 delayed those initial plans from 2020 to 2021… and also prompted Amy to hold the ceremony/reception on property owned by her ex-husband, Matt.

But Amy doesn’t have any regrets, that much is certain, based on her post-wedding chat with People Magazine.

"It was just all so right and good," Roloff tells the publication, adding in delight:

"I am just elated. I’m happy. I’m thrilled that I have found someone to spend the rest of my days with."

Making the occasion all that more special for the veteran reality star?

As you can see directly above, her dad was able to attend, despire ongoing health issues that made this questionable for a period of time.

"In our wedding barn area we had the doors closed, but there are cracks in the door because it’s a 100-year-old barn," explained Roloff to People.

"It was a beautiful day and I could see Chris waiting. I thought, ‘Oh, he did wear the suit. He didn’t get all weird on me and wear a Hawaiian shirt or something!’

"He just looked so handsome and just peeking through the cracks in the door."

Seeing her soon-to-be husband was memorable for Roloff — but the same could be said for role her father played.

"When [the doors] opened up, I walked halfway down. So my first look was to my dad," she continued to People.

"When I reached my dad, my next focal point was Chris.

"To me, it was like, these are two — of course my dad was the first man in my world and here I had a second chance at love and just seeing Chris there …

"… It was the most special moment."

Among other key details from the weddding?

"I think what I’m looking forward to the most is just really dreaming together," Amy says, concluding of Marek:

"We’re all in now, so it’s just solidifying the relationship, where we live."

We’re so very thrilled for this couple.

Go behind the scenes of their wedding below! 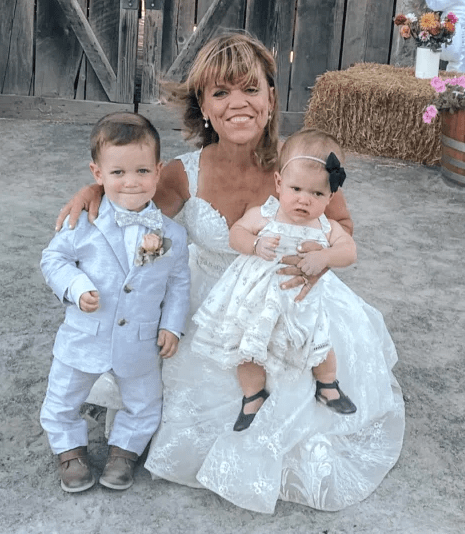 Amy Roloff Wedding Album: Behind the Scenes of a Very Special Day…