You’d be hard-pressed to find a pair of celebrity exes with a stranger dynamic than Kourtney Kardashian and Scott Disick.

Scott and Kourtney have taken that concept to weird new heights, and from an outsider’s perspective, the whole thing can be a little confusing.

As far as we can tell Scott and Kourtney broke up for good back in 2015.

In the years since, their relationship has undergone many, many changes.

For a while they were hostile toward each other, but for the most part, they’ve been friendly … sometimes very friendly.

Yes, the rumors of Scott and Kourtney hooking up over the years appear to be true, but it doesn’t look as though their reconciliations have ever progressed beyond the “friends with benefits” stage.

It seems that when they’re both single, they find their way back to one another’s beds, but when one or both of them is in a relationship, they go back to platonically co-parenting.

And what does all of this have to do with Kourtney’s latest lingerie selfie?

Well, possibly nothing … but possibly everything.

If you follow her on Instagram, you know that revealing lingerie selfies are pretty common on Kourtney’s page.

But her latest photo session is racy even by Kardashian standards.

She even included an ultra-closeup of her cleavage, just in case anyone missed the vibe she was going for here.

The timing of this provocative display was not lost on fans, many of whom suggested that Kourtney might be putting on a show for Scott’s sake.

It’s a weird situation for a number of reasons, not the least of which is that Scott is 37, and Amelia is 19.

Amelia insists it’s not creepy that she’s dating Scott, and she frequently lashes out at trolls who suggest otherwise.

But the consensus remains that it’s a little bit creepy.

Adding to the creepiness is the fact Amelia is the daughter of Real Housewives of Beverly Hillls star Lisa Rinna, which means she belongs to the same social circle as the Kar-Jenner girls.

So it’s not hard to see why Kourtney might be a little weirded out by the situation.

And she might be resorting to some of her old tricks in order to regain control.

It’s not unheard of for Kourtney to show Scott what he’s missing by posting a risque selfie or two.

And this time around she might be especially eager to remind both her ex and the world of her undeniable hotness. 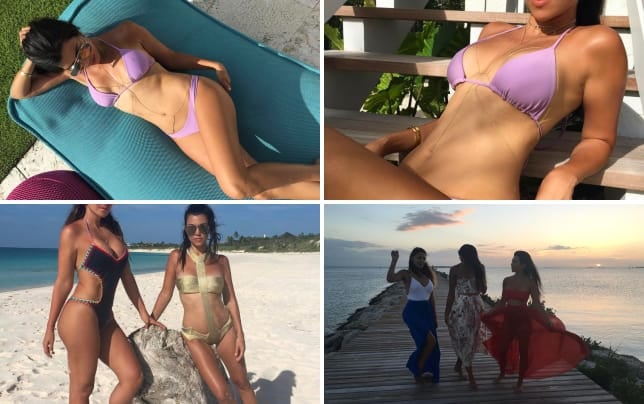 As self-confident as she is, she must be at least mildly annoyed at the idea of her baby daddy publicly chasing after literal freakin’ reenagers.

Honestly, at the end of the day we have no way of knowing if Scott was on Kourtney’s mind when she posted this pic.

But we hope that he saw them — and that she’ll be on his mind for quite some time.