It’s official, folks: Laura and Aladin Jallali are divorced and she is ready to find a new sugar baby. Slide into her DMs, boy toys!

But Laura wants everyone to know that Aladin is — according to her — a big ol’ cheater.

Way back in 2019, the first season of 90 Day Fiance: The Other Way premiered.

Season 1 introduced us to Laura, an older woman from Florida who was head over heels for a much younger man from Tunisia.

While some fans had questions about Aladin, there was no real mystery about what Laura saw in her husband-to-be.

Once Laura arrived in Tunisia, however, there were problems.

Oh, Aladin enjoyed their "jiggy jiggy" time — that is, sex, but Laura thought that he could use some pointers.

Laura experienced a cultural adjustment in her move to Tunisia, to say the least.

Then there was Liam, her young adult son who came to visit.

Though cameras and editing tried to play him up like Coltee 2.0, his concerns were legitimate.

Liam had spent his life plagued by his mother’s terrible decisions, and knew better than Aladin or any of the viewers what a catastrophe this would end up being.

No one listened to him, however, and production was not kind to him in the editing process.

Sure enough, Laura and Aladin got divorced — a process that had just begun when they filmed the Tell All.

In October, Laura was interviewed on The Domenick Nati Show..

“My current relationship status with Aladin is we are officially divorced," Laura shared, "as of 12 p.m. our time."

“So I am now single," she announced. Single, and ready to jiggy jiggy.

"If there’s any men who wanna put a ring on it," Laura joked, "I will judge the diamond size and the quality."

"But yeah, totally, come on, DM me. Show me the ring," she added. Is she speaking in euphemisms? It sounds like she’s asking about dick pics.

In a play on words, Laura quipped: "Let’s get jiggy with it.”

“It’s over," Laura said to taunt Aladin from afar. "See ya later. Thanks for the ride. Hasta la vista, baby.”

She accused him of not paying her the $30 per month that his divorce required him to, but announced that he could "keep" that money.

But Laura’s alleged forgiveness in this area is coupled with bitterness towards Aladin … whom she now accuses of  having cheated on her.

“When we both agreed to go on the show," Laura recalled, "one thing I said to Aladin prior was, ‘Please don’t do me wrong.’"

"I’m not gonna go on TV with you if you," she said that she told him, "are going to eventually leave me for somebody younger [and] more beautiful."

Laura says that Aladin "promised" that he wouldn’t cheat on her (is that not what getting married is?).

“Straight up, that’s what happened," Laura accused last month, saying that Aladin was suddenly popular thanks to being on TV.

"He’s got inundated by a ton of women," she alleged.

"I mean," Laura added, "he was already engaged six months after our tell-all."

"So, in that regard, he wasn’t the most faithful man, you know what I mean?” Laura added.

“Did he sleep with somebody when I traveled to New York City to do my tell-all?" she then suggested.

"He had a lot of girls there in Africa that were quite interested in him," Laura says. He had lots of interested women in many continents, actually.

"They all thought he was really rich," she claims, "because the TV cameras coming to Tunisia to film our second wedding." 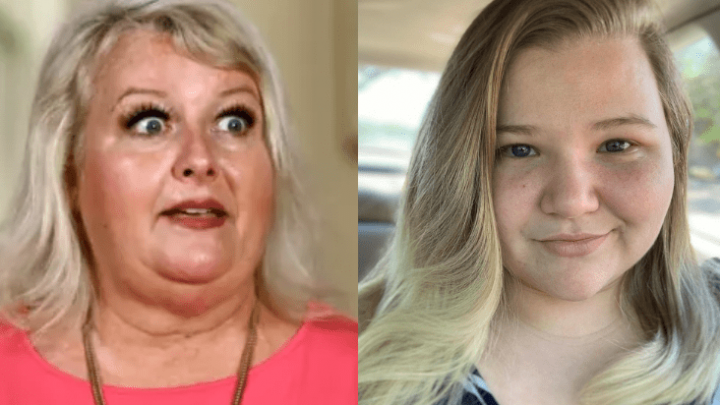 Nicole Nafziger Claps Back, Comes For Laura Jallali: Don’t You Mom-Shame Me, Bish!