Carly Wilson really wishes we were not talking about her right now.

If it were up to this heretofore unknown woman, no one within the celebrity gossip circles of the Internet would know her name.

But that’s not the case in any way, shape or form now.

Wilson was thrust deeply into the spotlight when Jim Edmonds allegedly thrust himself deeply inside of her, if you know what we mean.

Late this past week, the bombshell news broke that Jim had filed for divorce from Real Housewives of Orange County alum Meghan King Edmonds, doing so one day after the couple’s fifth wedding anniversary.

This development didn’t come as an enormous shock on its own.

Meghan made it clear the marriage was on thin ice over the summer after rumors swirled that Jim had been unfaithful to her while she was pregnant last year.

But the divorce news was accompanied by a new and stunning revelation:

Meghan now thinks Jim cheated on her again – with the family’s nanny!!!!

According to celebrity news magazine Us Weekly, police were called to the couple’s home after Meghan confronted Jim about this rumor.

He reportedly denied stepping out on Meghan, and the argument never turned physical.

But Jim still filed to end the union a day later.

Neither side has spoken directly on the cheating speculation, but Meghan did share a selfie on Instagram that included the words "so raw" and an arrow pointing up at herself.

As you can see underneath this selfie, Meghan also seemed to confirm what one follower wrote as a comment:

That the nanny in question was Carly, someone Jim had apparently shared numerous photos of about a year ago.

“Are the rumors true??? Are you not with Eric anymore? With Jim now??? The Bible quoting soul searching girl? This can’t be true!!!! Please confirm!!!!!” one of her followers wrote below an Instagram post, in an interaction highlighted on the comments by Bravo’s Instagram account.

Her side, at least.

Back in June, both Meghan and Jim responded to chatter that he had rekindled a romance with a former groupie of his from his professional baseball-playing days.

This woman alleged that she was sleeping with Jim while Meghan was pregnant with their twins… that Jim often sent her naked pictures… and that he even sent her a video of him jerking off on the day these twins were born.

Said Jim at the time:

“Regrettably, I had a lapse in judgment. I engaged in an inappropriate conversation with this person. At no time was there any type of relationship or physical contact. Absolutely none…

"Clearly, I made a very poor decision to expose myself and my family to this type of person. For this, I am truly sorry and sought forgiveness from my wife."

Meghan wasn’t sure if she believed Jim never slept with this woman, but stated his contact with her was wildly inappropriate either way.

“I don’t trust him anymore,” the Bravo star wrote in a post titled “I’m Sad," adding in more detail:

“Physical or not, he still had an affair and he admits this to me… I sob so much my face stings from the salt from my tears."

As for what Jim and Meghan are saying now? The former has gone on the attack … or something. Check it out:

The Gold Glove Award winner shared a cryptic quote on his Instagram Story on Saturday, October 26.

“No one can throw a bigger tantrum than a narcissist whose [sic] losing control of someone else’s mind,” the post read.

Finally, it yet another sordid twist, Jim reportedly went to get his belongings over the weekend…

… and his mother-in-law called 911 in response.

“Jim just went to his house to get his clothes out of his house while Meghan took the kids to an event and Meghan’s mom was there,” a source tells Us Weekly, adding:

"She called the police. The cops showed up and asked them what was going on. Jim said it was his house and he was getting his clothes as they told him to, when Meghan wasn’t there.”

No arrest was made of course.

The couple got married in October 2014 and share three young kids together, one of whom tragically has brain damage. 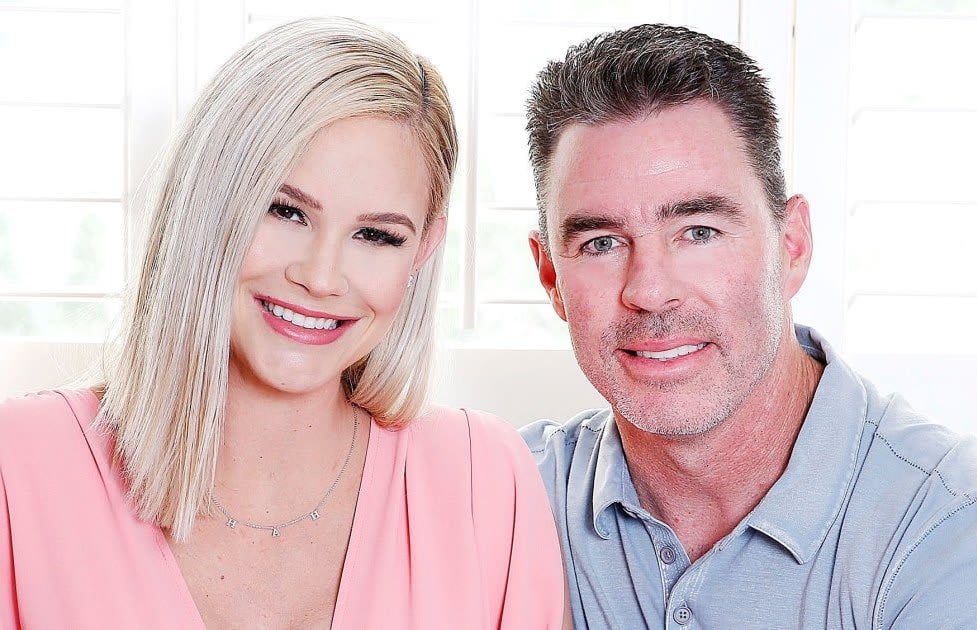 Meghan and Jim Edmonds: It’s Over! Amid Rumors He Cheated with the Nanny!