Mariah Carey and Bryan Tanaka are still going strong… at least according to the singer’s latest Instagram post.

The 46-year-old singer uploaded a photo of herself and her cute boy to the social media site on Tuesday.

It’s clear the pair are not concerned with PDA.

Have a look at the picture below.

There’s no denying that they make a great couple, but the picture is not the issue here.

"No one knows what it means, but it’s provocative … it gets the people going!"

Mariah seems to think people will be so excited over the "provocative" picture, but it’s pretty much the norm these days that couples would take to social media to show off their love.

It’s sickening to some, but that’s what happens.

The very notion that Mariah thinks the picture will have her fans clamoring for more is pretty ludicrous.

Hey, she’s got to find a way to put the New Year’s Eve fiasco behind her, but this is not the right way to go about it.

If you watch Mariah’s World online, the chances are that you already got to lay eyes on the couple getting up close and personal, so this is nothing new.

Mariah started dating Tanaka in late 2016 after her engagement to James Packer came to a grinding halt.

Packer’s appearances in the E! reality series were heavily edited, so we never got to see much of their relationship play out.

It was all about Mariah and Bryan. To be fair, they did make for great TV, and the show successfully showed the singing sensation in a new light.

It’s just a shame that Mariah’s problematic New Year’s Eve performance is going to hang over her career like a dark cloud for some time.

Mariah’s performance was marred by technical difficulties, which found the star claiming that she was set up.

Celebrities got involved, with the likes of Jenny McCarthy pointing out that Mariah’s voice is not what it once was and that’s part of the reason why she never sang without the backing track.

Either way, we’re sure Mariah can take solace knowing she has Bryan Tanaka to kiss all over Instagram to show off how AMAZING her life is. 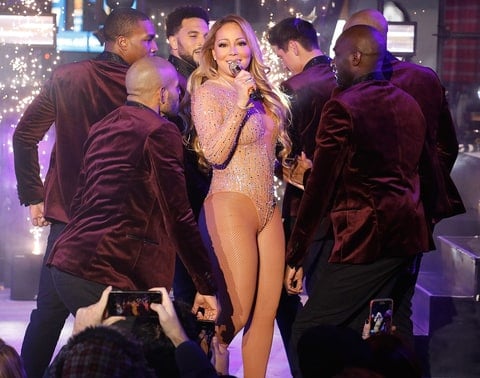