What is Khloe Kardashian’s net worth? The notion that the Kardashians are rich is not news, and Khloe specifically gets her hustle on.

How rich is she, though? You might be surprised …

Estimates of Khloe Kardashian’s net worth are all over the map, with the only true consensus being that she must be doing alright. Right?

She was, after all, born into a wealthy family and a life of celebrity, opportunity and fortune as the daughter of Kris Jenner and O.J. Simpson.

Just kidding. Seeing if anyone is paying attention.

But seriously folks, her last name is worth a boatload. When Kris inked a nine-figure deal with E! for the family’s TV show, well …

Cha-ching. For everyone. Khloe got a nice kut.

Her role on Keeping Up With the Kardashians would be enough to enrich her, but she has created an empire independent of her family.

An empire so big, it makes Khloe’s net worth …

… an estimated at $24 million dollars!

Yep. At age 32, the reality star made a reported $15 million for her various endeavors in 2016 alone, which is an obscene sum to be sure.

If you think about it, though, she’s never not hustling, and Khloe Kardashian’s net worth is comprised of many different business ventures.

Chief among them, admittedly, is Keeping Up with the Kardashians. That’s still the flagship of the Kardashian franchise, by leaps and bounds.

Her own spinoff, Revenge Body with Khloe Kardashian, debuted last year though, and showcased that she’s a mogul in her own right.

Away from television, Khloe has a business interest in the Dash clothing boutique, as well as the Good American denim line she co-founded.

She has worked with Kylie Jenner’s cosmetics line – a burgeoning venture and possible future juggernaut – on a line of Koko products.

Khloe is the author of several books: Doll House, Kardashian Confidential, and Strong Looks Better Naked (yes, that is the actual title).

Moreover, Khloe also has a long list of social media endorsement deals to her credit, and her house alone is estimated at $7.2 million.

Heck, she even does paid public speaking.

Perhaps the most impressive part is that she signed a prenup before marrying Lamar Odom, effectively preserving her interest in all this.

Her late father – Robert Sr., not O.J. – was an attorney who Kim and Khloe have both credited with teaching them the value of contracts.

A savvy, hard worker with her hand in everything from TV and books to makeup and fashion, Khloe’s net worth should only keep rising.

Yes, you could chalk a lot of that up to good fortune, in terms of the Kim Kardashian sex tape raising everyone’s profile back in the day.

As Ray J recently said, it was all Kris Jenner’s idea to market and profit from the thing, and man alive, did that prove to be forward thinking.

Still, you can’t take this away from Khloe:

She’s found one niche for herself after another, remaining very true to her personality and exceeding any and all expectations in business.

Considering the personal tumult she’s been through, and the tabloid scrutiny she’s under, it’s all the more impressive when you think about it. 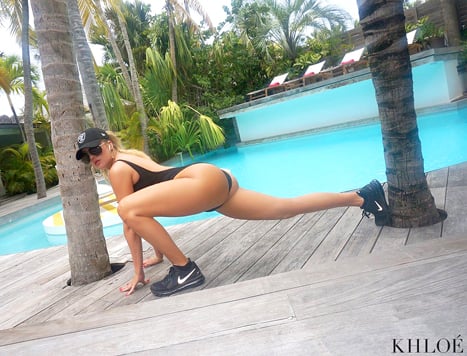