Jon Voight once said that Barack Obama was focused on the "destruction of this country," specifically slamming the former President as someone who lied to Israel and to U.S. citizens.

But Voight was just being a true patriot at the time.

Conversely, Miley Cyrus and Shia LaBeouf and all other people who have spoken out in defiance of Donald Trump are traitors to this amazing nation.

So goes the logic of Jon Voight, apparently.

Speaking to TMZ on Tuesday, Voight went off on the Women’s March, a global event last Saturday that drew over 3.5 million people across various states and countries.

It was a peaceful protest against Trump’s personality and politics, with not a single arrest made in Washington D.C., despite a gathering of 500,000 concerned citizens.

Cyrus took part in the March, holding up signs in support of Planned Parenthood; while LaBeouf staged a “He Will Not Divide Us” lifestream resistance of his own in New York City.

And Voight voiced his objections to it all when talking to TMZ.

"It’s been very serious and very destructive, this marching against the government and against the president. Very, very serious," Voight explains in the following video.

What about the First Amendment, a cameraman asks the veteran actor?

"It is what the First Amendment’s about, but what was the march about?” Voight confusingly replies.

Voight then went for the insane and illogical jugular.

"The march was against the government and against this president, trying to denigrate his office and his presidency, and that’s no good,” he said.

“And when you see the young people, like Shia LaBeouf and Miley Cyrus, and they have a lot of followers. Young people are looking at them, and what are they teaching? They’re teaching treason."

Voight seemingly thinks that if you speak out against a President in a strong and passionate (and peaceful!) manner, then you are a traitor.

Guilty of betraying your free country, rather than exercising the very rights and freedoms that the country provides and makes it great.

Heck, Trump himself has said the opposite.

In a Tweet clearly written by someone else, or during a rare moment of lucidity, the President wrote of the March earlier this week:

"Peaceful protests are a hallmark of our democracy. Even if I don’t always agree, I recognize the rights of people to express their views."

LaBeouf actually went viral after confronting a white supremacist during his livestream. The eccentric actor received widespread support for his actions.

But Voight was not impressed.

"They’re teaching going up against the government, not accepting the will of the people on this presidency," he said to TMZ.

Hey, that is one man’s opinion.

And he’s very much entitled to it… the same way Cyrus, LaBeouf and many other stars are entitled to their opinion.

Did Madonna take her speech too far? When she claimed on stage that she had thought about blowing up the White House?

Yes, of course. She deserved criticism for that.

But she’s since apologized and tried to expound on the point she was trying to make, using nuance in a statement released via Instagram.

Voight, however, is not really one for nuance.

He gave a speech at Trump’s inauguration concert, during which he complained about the “barrage of propaganda” and “all the negative lies against Mr. Trump."

And Voight has no idea why these lies are out there, considering Trump is just a man who wants to "make America great again," he told the crowd. 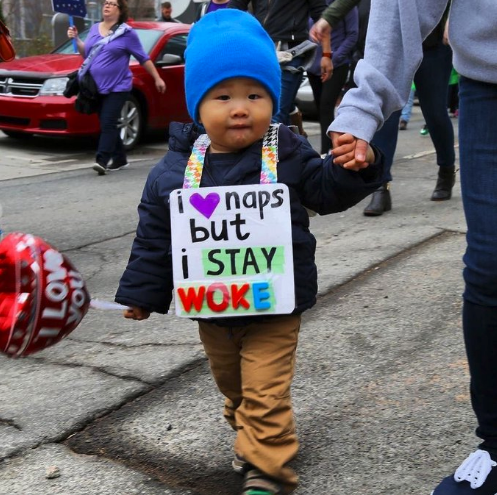 So before you go ahead and slam the actress, perhaps you can now understand why she may not always come across as mentally balanced.

Can you imagine the way in which she was raised?!?