But that didn’t mean the latest installment of this Freeform* drama didn’t produce the most awkward family reunion in television history.

(*We will never get used to referring to this network as "Freeform." Never, ever, ever.)

Within a mere two minutes of his return to Rosewood, Jason tried to execute a plan that would oust Mary Drake from Alison’s life.

This entailed an extended invite to Aria as his plus-one to dinner, which forced them to briefly confront their romantic past.

(Seriously, remember when #Jaria was kind of a thing? Kind of sort of? Almost? Yeah. We mostly forgot all about it, too.)

HOWEVER, Jason’s plan more or less fell apart in grand fashion when Mary served the main course… which ended up being a sob story over how Jessica kept her in the dark about Charles’ supposed death.

(We were just shocked no violins started to play for her in the background.)

In the end, though, the evening wasn’t a complete waste. Her tale led the gals to Jessica’s secret lair, where they discovered that Charlotte had … a biological sibling.

We may not even have included enough question marks and exclamation marks there. Let us try again:

Who the H-E-Double Hockey Sticks is mysterious sibling? Is it A.D.? Or is it someone A.D. is looking for?

Please take your best guess as to the identity of the über villain who was seen with Aria and Noel’s files at the conclusion of the episode.

We may need to go watch Pretty Little Liars online to even start coming up with a theory.

Other Pretty Little Notes from the intense hour:

Because Aria is always quite busy solving murders and what not, Ezra suggested a destination elopement.

The engaged twosome were about to hit the road … when they were interrupted by a knock at the door. Who was it?

A certain presumed girlfriend who we no longer need to presume is dead.

Spencer learned that Toby started building that house for her, which was only the second most difficult thing she had to hear.

She was also told that he and Yvonne are moving to Maine to start a family.

Hanna at last came clean to Caleb about her break-up with Jordan. This somehow didn’t lead to immediate intercourse, but we’re pretty sure it’s just a matter of time.

Finally, Emily’s mom continued to be totally and completely awesome.

Like, totally and completely. Can she please get a spinoff when Pretty Little Liars goes off the air? 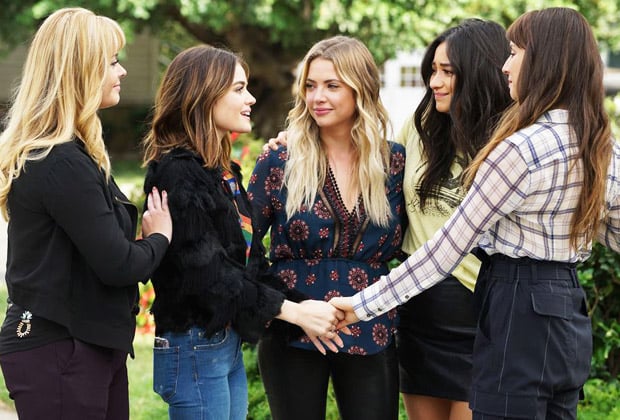