The most powerful woman in the world has shared a new photo on social media.

And it includes Hillary Clinton!

Just like Kim Kardashian before her, Kris Jenner has posted a picture of her and the Democratic favorite for President on Instagram.

She included with it a caption that reads as follows:

"An Honor to meet you Hillary Clinton! Great evening… #ohjustchatting."

Kim, Kanye West and Kris Jenner were among the many guests at Scooter Braun’s home in Los Angeles last night for a Clinton fundraiser.

Guests had to pony up $2,700 each to attend; which we’re pretty sure any member of the Kardashian family can just fish out of their pocket at any time.

But not every one of Jenner’s followers were excited to see this unexpected photo show up on their feed.

Consider the reaction of "niclinmom," who wrote: Love u Kris but this just made me throw up in my mouth.

Or the response of "tim_mandese," who jumped in with: Well this is fitting. Nothing is real about the show or Hillary! Nice product placement!

We’re not entirely sure what product is being placed, but overall point taken.

It sounds like most of Jenner’s fans want her to stick to pimping out her daughters and stop trying to make political statements. 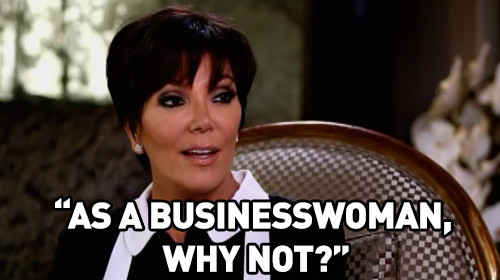