It is totally on between Justin Bieber and Mark Wahlberg.

Earlier this week, the singer went all Kim Kardashian on fans, trying to break the Internet via the release of his Calvin Klein underwear photos.

Most honed in on Bieber’s well-chiseled body; his dynamite six-pack; and his possibly Photoshopped crotch.

But one woman focused on a different underwear model instead, as Rhea Durham called out Bieber for failing to live up to the hot standards set by the original Calvin Klein hunk, Mark Wahlberg.

Durham believes nearly naked spread in Wahlberg’s 1992 is the "best," prompting THG to turn this question over to our astute readers:

Compare and contrast the gorgeous bodies above and vote now: Which would you rather have draped all over you in bed… if you know what we mean?!?

Bieber, meanwhile, says he spoke to Mark Wahlberg about his copycat pictorial and that he’s simply "honored" to be a part of the long-time Calvin Klein "legacy."

And then Durham backed track a bit amidst some backlash, Tweeting to Bieber her congratulations that the "torch" of sexiness has been "passed" from her husband to the Canadian singer.

But whatever. Those niceties aren’t any fun!

Drool over the following pictures and let this fiery feud continue! 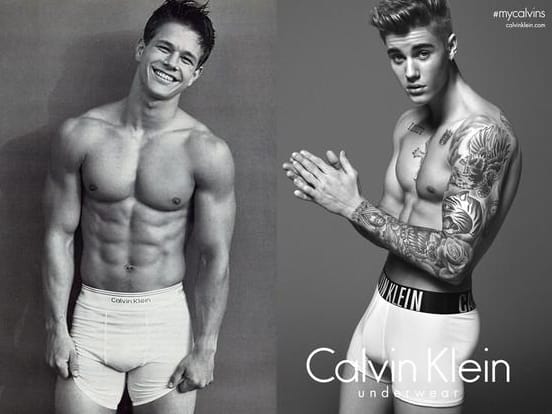