Oh hell, there goes her top.

On last night’s episode of Dancing With The Stars, eight teams continued to fight for the mirror ball trophy and avoid double-elimination.

The night’s theme was "Icons," where each team performed routines to songs by legendary American artists.

Sharna Burgess and NFL star Antonio Brown danced to The Rolling Stones’ "Paint It Black," and all was going well until one of the girls tried to sneak out of Burgess’ costume.

As judge Len Goodman was listing off Brown’s mistakes during the dance, host Tom Bergeron interrupted during the east coast live broadcast to let everyone know that Burgess was in the middle of a wardrobe malfunction.

It was terribly awkward, the way Bergeron handled the situation.

"They [producers] said to me, ‘Look at Sharna’s top,’" Bergeron announced, holding his ear piece. 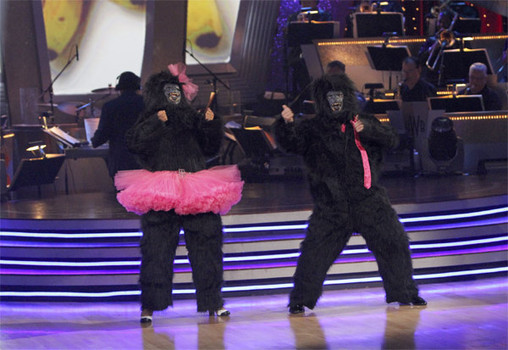 22 Most Daring Dancing with the Stars Costumes

Burgess was a great sport, and laughed when Bergeron told her about the nip slip.

"I’m only doing the producer’s bidding.

"Pull it up, just a touch, just for the family," Bergeron told Burgess as he blocked her so that she could readjust.

After the girls were back in place, Burgess joked that she deserved a score of 10.

The pro dancer continued to joke about the malfunction on Twitter, tweeting with others and laughing about what had happened.

Hey, you had a nip slip.  It happens.

It’s like that time on Friends when Rachel Green’s boob fell out of her Bloomingdale’s chemise during dinner with Joshua and his parents.

Watch the video below of last night’s competition…and the malfunction.