Back in Septmber, Lala Kent announced that she’s pregnant with her first child.

That means Lala is one of four — count ’em, four — Vanderpump Rules stars who are currently knocked up.

With the possible exception of the Duggar family, we don’t think one reality show has ever featured so many pregnant cast members at the same time.

It’s an impressive feat, although if Vanderpump is canceled before its ninth season, as currently seems likely, fans my be deprived of trhe opportunity to see what happens when the Witches of WeHo’s tempers flare because of pregnancy hormones instead of vodka tonics.

Of course, there are a lot of big egos on the Vanderpump cast, but Lala might be vainest of them all.

We don’t mean that as an insult — after all, Lala isn’t shy about thinking she’s the sh-t.

But she’s got her work cut out for her in the months to come.

You see, the ladies of #PumpRules are competitive in all things, and you can be sure they’re trying to one-up each other with regard to who can post the baddest pregnancy selfie.

Fortunately for Lala, she has a firm understanding of one of the internet’s most important rules — nudity always gets clicks.

The 30-year-old posted the pic below on Instagram this week, and while we’ve certainly seen Lala nude on several previous occasions, we’ve never seen her quite like this.

While the Vanderpump moms might feel competitive toward one another, it’s always friendly competition, and that spirit was reflected in the comments on Kent’s pic.

“Gorgeous all the wayyyyy!!! But damn girl those boobies are speaking a whole new level of milk game. So happy for you!!!!” Shahs of Sunset star Golnesa Garachedaghi commented.

Kent learned that she was pregnant over the summer, and she eagerly shared the news with fans

“I had the best [birthday] gift given to me, my body also helped out too,” she said during an episode of the podcast she hosts with fiance Randall Kent.

Lala’s gender reveal party was one for the ages, as a skydiver with a pink parachute revealed the big news.

“I just assumed I’m having a boy,” Kent told Us Weekly after the celebration.

“It was a bit of an adjustment. And then I saw my mom, and I just bawled because I get to have that. I get a little mini Lala.”

“I feel like I’m really good with girls,” Emmett added. “And I’m old. I feel like if we had a boy, he would be like Tarzan off the walls.”

As for the possibility of filming the birth for the ninth season of Vanderpump (should it ever take place), Lala says she’s all for it.

“I would not be opposed to having a film crew there during the birth” she explained, 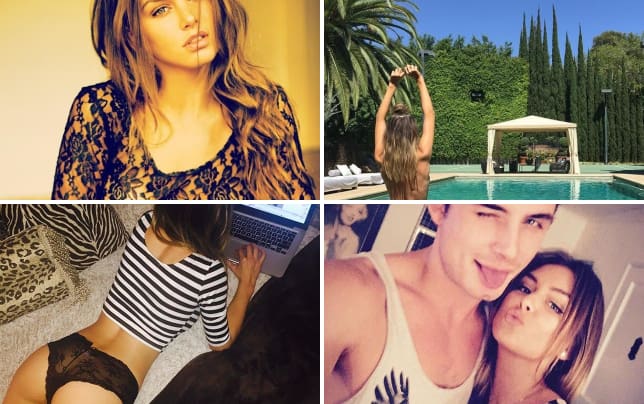 “For me, it’s something you’ll have forever, you know? Bring them in.”

A Vanderpump season with four births?

Now that would certainly bring a different type of screaming and crying to West Hollywood!