Joe Giudice showed two distinct sides to himself in two separate Instagram moments over the weekend.

First, there was the candid and vulnerable side.

On Saturday, Joe wrote more in-depth than ever before about his marriage to Teresa Giudice, which lasted two decades and produced four beautiful daughters.

It finally ended in December, however, following many bumpy months during which Joe was secluded from his family — either in ICE custody or living abroad in Italy — and Teresa almost definitely cheated on him.

All these weeks after his separation was confirmed, however, Joe doesn’t sound bitter.

He sounds both resigned to his romantic fate and refreshingly honest about the role he played in it.

"No matter how much energy and time I devoted to trying it failed,” Joe captioned a video montage of family photos on Saturday, February 29

He added at the time:

“I did my best and put all efforts into making this a great experience for my family. I did try to address issues in the relationship that bothered me throughout the years in return portrayed it as Criticism!

"My key role was to always to be a great father and husband not the [black bars emoji]."

Okay, so maybe Joe does still sound a little bitter, doesn’t he?

This is how he concluded on Saturday:

"I can’t allow others to keep lingering toxins and undesirable demands around me. I choose to have a solid foundation with strong and inspiring people around me in."

During this episode, Joe said his knew his marriage was over when Teresa and the kids visited him in Italy late last year… and Teresa refused to sleep with her husband.

Said Joe after this incident:

“My wife has never said no to sleeping with me. I had to walk away. I don’t have resentment against her (her emotions are justified). it was off guard should have been private.”

All this said, Joe would still sleep with Teresa right now.

On Sunday, Teresa posted an Instagram photo of herself in a cream-colored pantsuit adorned with sparkles … and Joe remarked on it via a series of fire emojis and a rose emoji underneath the picture.

“Thank you for providing so much for this family,” he wrote to Teresa. “I think we make a great team. I really appreciate you — Happy [Valentine’s] Day."

Teresa, for her part, has expressed no similar sentiment in return in regard to her estranged spouse.

And yet: Fans are still wondering whether Joe and Teresa might get back together.

We’ll just go ahead and answer that question now: No. They will not. 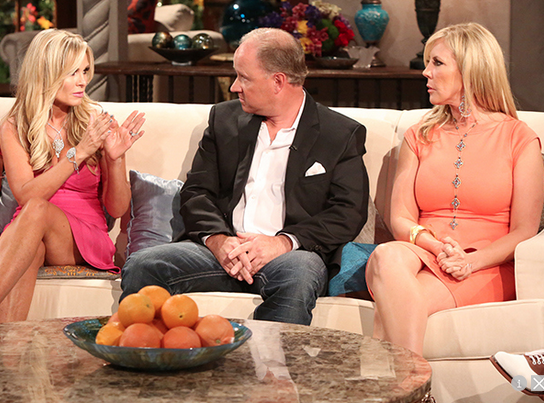