We all know Derick Dillard has his problems.

In fact, there are times when it seems like the guy is nothing but problems.

Ever since Derick was fired from Counting On for harassing a transgender teen on Twitter, he’s been embroiled in one scandal after another.

Most of these controversies have had to do with Derick’s feud with Jim Bob Duggar, which seems to get worse by the day.

But despite the fact that he can never seem to get along with his father-in-law, Derick has always been respectful of his wife.

That is, he’s respectful by the standards of the Duggars, a family that teaches its children from a young age that men are always right and women should do as they’re told.

Derick failed to clear even that very, very low bar this week when he posted this pic of Jill and seized the opportunity to make a joke at her expense.

“Baby Sam helping Jill in the kitchen,” he captioned the pic.

Well, from there, Derick royally effed up by adding the hashtags “Teach Em Young” and “Woman’s Work.”

Let’s set aside for a moment the fact that Derick’s joke doesn’t even make sense (If it’s woman’s work, why would Jill need to teach her son how to do it at a young age?) and focus on how horribly misogynistic it is.

Like the rest of the Duggars, Derick gets away with a lot on social media because most of his followers share his evangelical world view.

But — as OK! magazine points out — even Derick’s fans were unhappy about his latest post.

“Not so sure the woman’s work hashtag is the best hashtag,” one person wrote.

“Hashtag ‘woman’s work?’ Wow and I was rooting for you too….” another commented.

“I was with you until I saw #womanswork. This makes me sad and angry,” a third chimed in.

"All this picture says to me is … Jill is cooking with a child strapped to her back while you have the luxury of standing there watching and taking a picture on your phone …….. Maybe try HELPING her!” added another follower.

“What are YOU teaching him? Get him out of that carrier Dad…. Get your hands in the sink," yet another fan offered.

Others apparently buy into Derick’s image of himself as some sort of edge-lord master troll.

“You know by now that he loves messing with the public. I found it funny!”

Apparently preferring this interpretation to the the idea that her husband is a lazy, unemployed jackass, Jill replied, “Yup.”

Yes, Derick is that guy who says something offensive, and then when he gets called out for it, hides behind the old "Kidding! Gawd!" defense.

It might have been effective when he was on TV making money.

Now that he’s lounging around the house all day and making the occasional delivery for Grub Hub, his jokes about who should be doing what work aren’t don’t really … well, work. 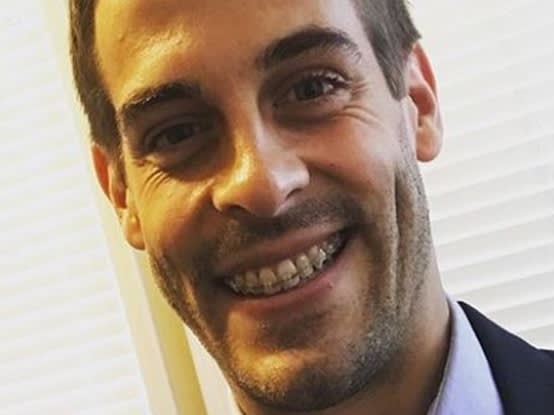