Cory Wharton just dropped a rather huge bombshell on the Teen Mom OG universe, confirming to celebrity gossip site Us Weekly that he and girlfriend Taylor Selfridge are expecting their very first child together.

“It was definitely a surprise,” Wharton tells the supermarket tabloid of the news, which he says the couple found out about two months ago.

Selfridge is 11 weeks along and will be welcoming her very first child overall.

Wharton, meanwhile, shares two-year-old daughter Ryder with ex-girlfriend Cheyenne Floyd… which is how he got famous in the first place.

("Famous" is a relative term these days, of course.)

When Floyd joined Teen Mom OG last season, a significant portion of her opening season storyline centered on her on-again/off-again relationship with Wharton.

Cory, for the record, didn’t know Ryder was his daughter until she was 6 months old.

That development means that this pregnancy with Selfridge is actually the first one he’ll get to experience as an expecting father.

Added Wharton while speaking to Us Weekly:

“Just being there from the day she found out that she’s pregnant and knowing that it was mine, I knew that I was going to have to step up.

"It’s exciting for me. It’s gonna be a lot, but I’m excited. I never went to an ultrasound, you know? I never went to the doctor’s appointments to see her check-ups and things like that.

"So for me, this is like my first baby almost, as weird as that sounds.”

For her part, Floyd has not yet commented on this development, but Cory sure has, both to Us and on Instagram Live.

When the couple made the big reveal in front of their fans online, his response left some people shaking their heads.

Kidding? We certainly hope so.

Throughout last season of Teen Mom OG, she made it sound like she was anxious to commit long-term to Wharton, but he never gave her the same indication.

She’s since brushed off Wharton’s relationship with Selfridge, which was made public back in February.

Cory and Taylor say they do plan to find out the gender of the baby when the time comes, but for now, he’s hoping for a second daughter.

“I just originally thought it was a boy, but now I don’t know,” Selfridge told Us Weekly. ”Everybody’s saying girl, so now I just feel like it’s a girl!"

Floyd, it’s worth noting, has been very positive toward the father of her child and Selfridge, despite issues she initially had with the couple.

When it came to being around Ryder, she wasn’t always supportive.

“I went over to Cheyenne’s house and I was dropping Ryder off and I just said, ‘Hey, so Ryder’s going to be a sister!’ There’s no easy way to tell somebody that,” Wharton said of breaking the news to the Teen Mom OG star (above).

Selfridge added she feared Floyd would “freak out" about the new, but Wharton said he’s gotten nothing but love from her family.

"They really were supportive from day one," he states.

Cory and Taylor met during season 1 of MTV’s Ex on the Beach in 2014 and started dating after the show.

They broke up a short while later and then were sort of back and forth for about two years, including the period when Wharton was trying to figure out his future with Floyd.

In the beginning, Taylor and Cheyenne didn’t get along very well, as you might imagine … 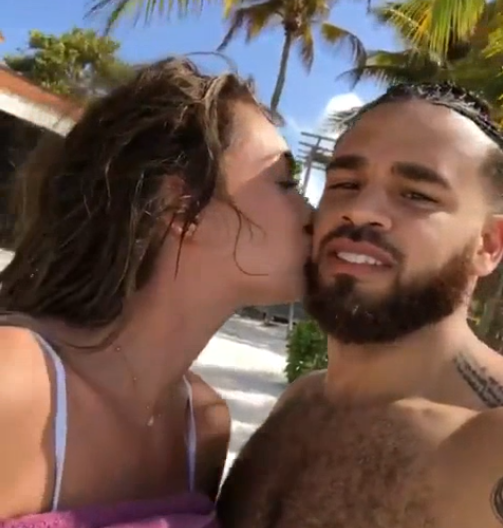 … But now it seems like everyone is on the same page.

“It took time and effort from both sides to put our differences aside and to know we share a common goal,” Floyd told In Touch exclusively in August about her bond with Taylor, concluding:

“I love Ryder and want her to always be surrounded by good loving people."