The secret to a good burn is specificity.

When making fun of your friend’s corny sneakers, for example, don’t just say they’re cheap; say he found them at the bottom of the deep discount bin at Marshall’s and made a scene at the register when they wouldn’t accept his coupon.

Of course, nowhere is the art of the roast practiced with greater talent and enthusiasm than in the hip hop world — so it should come as no surprise that Nicki Minaj is a master.

In feuds with everyone from Cardi B to Miley Cyrus, Nicki has been sharpening her verbal sword for years, and she may have just reached the peak of her trash-talking ability.

We haven’t discussed Nicki’s beef with Miley for a while because it’s mostly been dormant.

(Seemingly because Miley realized she’s out of her league and tacitly admitted defeat.)

However, Cyrus seems to have reinstigated the feud accidentally — and now Nicki is more than happy to put the former Disney star on blast again.

In her recent song "Cattitude," Miley drops the line “I love you Nicki, but I listen to Cardi.”

Nicki was asked about the lyric in a recent interview, and not surprisingly, it seems she’s not a fan:

“But I do notice a lot of Perdue chickens recently have been trying to say the queen’s name for clout. And that’s always been happening.”

If Nicki had simply called Miley a chicken, the statement likely would have gone unnoticed, or worse, been denounced as weak.

Instead, it’s an early contender for Burn of the Week.

Granted, it’s only Monday, "Perdue chicken" is gonna be hard to beat.

And you can bet the superior diss won’t come from Miley, who’s apparently planning to sit this one out.

While promoting her new album, Miley addressed the controversial lyric only briefly, stating that Nicki and Cardi "are both queens" in her eyes.

Elsewhere in the interview, Nicki got more serious, stating that she believes Miley received more favorable coverage during their feud solely because of the color of her skin:

“That’s what [Cyrus] did in the first place," she said.

"And then the white girl cried and made the black girl seem like she was a bad guy. In the first place, she disrespected me in a magazine article for no reason.”

Nicki even went off on Miley’s recent Black Mirror episode (probably the weakest in the show’s history, TBH) and accused the singer of appropriating her character’s stage persona:

"Now you comin’ out with pink wigs, all you bitches want to be Nicki. This is the problem,” she said.

Clearly, Nicki is still not a fan of Miley’s.

But if she’s hoping to reignite their feud — which began with comments Miley made in a 2015 interview — she may be disappointed.

“I think what they do is so different from each other," she said when asked about the Nicki vs. Cardi feud in a recent interview.

"That’s why they both get a crown. They don’t have to share.

"They don’t have to break it in half. There’s no reason to fight over it,” she added.

“They’re both queens. And anytime you want to feel powerful and strong, that’s my go-to: Cardi and Nicki.”

That’s nice and all, but unless she’s privately contacted Nicki to apologize, she has no business publicly burying the hatchet.

You don’t get to start a fight and then announce that it’s over once it becomes inconvenient. 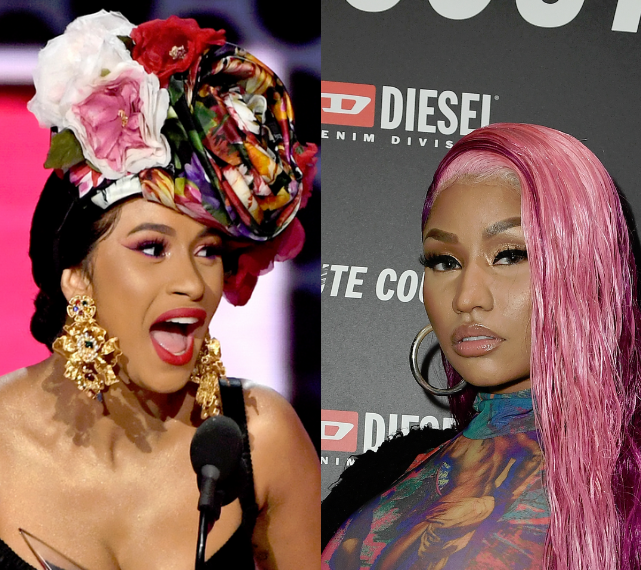