The Real Housewives of Beverly Hills star Lisa Vanderpump has vehemently denied accusations that she sold a story about Dorit Kemsley to Radar Online both on and off-screen.

Tuesday’s episode of the Bravo hit chronicled Lisa’s plight to have scientific proof that she was telling the truth.

The episode kicked off with her and John Sessa making their way to a polygraph examiner’s office.

The examiner was named John. Yes, there’s another John on this reality TV series.

He said, "I’m neutral, but I’ve been testing for over 30 years. If she’s lying, I’m gonna catch it in a second. If she’s telling the truth, she’s going to pass."

Vanderpump was ready for the whole thing to be over.

Sessa was the one to choose the "easy" questions to start things off, and one was particularly hilarious.

"Do you think Dorit’s face has changed in the last year as much as her accent?" John asked Lisa.

"Just don’t ask me if Erika’s tucking it under, or something like that, because there are some things I can’t lie about!"

"Have you ever given a story to Radar Online about Dorit Kemsley abandoning her dog to a shelter?" John went on to ask.

"Do you know who gave a story to Radar Online about Dorit abandoning her dog?" John asked, but Lisa denied any knowledge of it.

"Do you think you will ever forget the hurtful accusations made by your close friends?" John asked.

You guessed it, Lisa said "no."

"Do you believe these women who have accused you of giving a story to Radar Online are your true friends?" John asked.

Does this mean Lisa 100 percent did not lie? No. Lie detectors are not 100 percent, as much as some people would like to think they are.

Most of the other ladies were not in Beverly Hills. They were in Hawaii preparing for Camille Grammer’s wedding.

Erika Jayne and Denise Richards had things on, so they did not attend.

Kyle went on to dish the goodies about the lie detector with a story that sounded completely and utterly fabricated.

"My daughter Alexia’s very close friend was burglarized, and her house was under construction when the burglary happened," Kyle explained.

"She’s obviously taking a lie-detector test to say she’s innocent from whatever," Kyle replied. "She acts like she’s being accused of murder, for God’s sake!"

Everyone was in agreement that Lisa took things a little far.

"They’re not admissible in court," Mauricio noted as Teddi said that you can train yourself to pass them.

Rinna said that Lisa was only trying to keep up the "perfect" narrative that she wanted everyone to believe.

While that drama was going down, Denise Richards was shooting a Christmas movie with her ex-boyfriend, Patrick Muldoon.

My ex-husband’s aged me terribly I think," Denise said to Patrick.

"Charlie came over for Thanksgiving for dinner a few years ago, and he had a hooker in the car in the driveway," she told the camera.

What did you think of the drama? 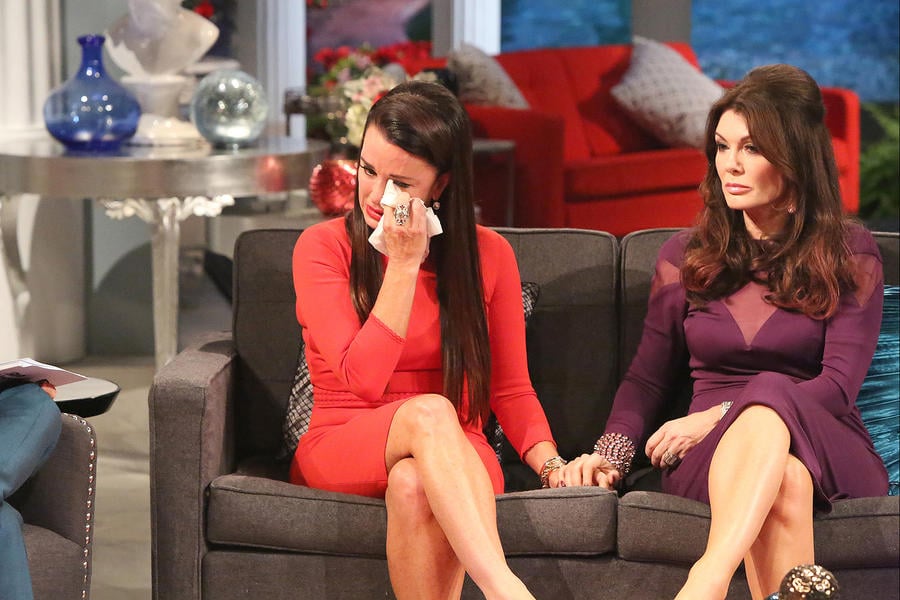