Savannah Chrisley is getting married!

And our initial thoughts go out to father Todd Chrisley who is probably having a cow over the thought of his little girl saying “I do”.

It was revealed on Wednesday that the Chrisley Knows Best star got engaged to her boyfriend Nicolas “Nic” Kerdiles, 25, on Christmas Eve, according to People.

The two, who met via Instagram, have been inseparable ever since they started dating back in November of 2017.

And a little over a year later, on December 24, the 21-year-old was shocked when her boyfriend got down on one knee in front of her friends and family at her Nashville home.

Chrisley finally opened up to People about her Christmas engagement, her dream ring, and the wedding planning!

“[On the night of the engagement], Nic’s family was in town and my whole family was there and we were filming and I was furious,” she says.

“I was like, ‘The fact we’re filming on Christmas Eve is absolutely insane. I have people here.'”

“And then my mom said she forgot something at the store. So, I got in the car and went to the store with her. When we came back and walked in the door, no one was there,” she explained.

But luckily their best friend’s kid Dylan was in on the surprise and directed them by saying, “Hey, I think they’re looking for you outside.”

Savannah walked outside to the beautifully lit up Christmas scene which was displayed in her backyard, Nic’s family was standing on one side, as the Chrisley’s were on the other.

“This isn’t really about to happen,” Savannah recalled saying as she started to freak out.

“And then, Nic looks at me and he was like, ‘Hey babe, will you come here?’ And you can tell he was so nervous, and I was nervous,” she continued.

“That was a long walk. I was like, ‘What is going down?'” Even though she totally knew what was going down:

“He said he had this whole thing written out, and he was just like, ‘I just forgot it all.’ And it was just so cute and everyone was crying.”

“It was just such a cool moment. And the fact that both of our families were there made it even better,” she shared about the unforgettable night.

The duo apparently had been planning for this moment for quite some time, especially when it came to the ring.

“I immediately sent him a picture of what I liked.”

Savannah even confessed that her mom Julie Chrisley actually picked out her engagement ring.

“My mom actually kind of picked out the ring, and so she went and sat down with a jeweler in Nashville and picked out the diamond and all of that,” she added.

“And so, it’s kind of cool to know that she picked it out.”

Not only was her mother involved in the engagement process, but of course her dad had to be involved as well.

Todd, being the overbearing and protective father he is, reportedly spoke with Nic before the proposal.

“It’s funny because Nic wanted to ask them in person, but he was in Canada and we were all in Nashville,” says Chrisley.

“He FaceTimed my dad. My dad said he was so nervous when he FaceTimed him, that he asked my dad for his hand in marriage!”

Todd’s humor got the best of the situation as he said, “You may want to re-ask that question.”

Nic, who is a professional hockey player, apparently hung up the phone before calling him back and asking the right way.

“And it was just so funny. My dad said he was so nervous,” Savannah spilled.

And although the happy young couple is thrilled for their next chapter, they’re in no rush to tie the knot.

“We’re taking our time,” Chrisley admitted when asked about the wedding planning.

“Just because you’re engaged doesn’t mean you have to get married tomorrow.”

“We know that we want to spend the rest of our life with each other,” said the soon-to-be bride.

Besides Savannah’s been too busy filming the spinoff show Growing Up Chrisley with brother Chase to have the time to plan her fairytale wedding, which we’re sure it will be.

The show, which revolves around the close-knit siblings testing out their so-called passions on the West Coast, airs on Tuesdays on the USA network. 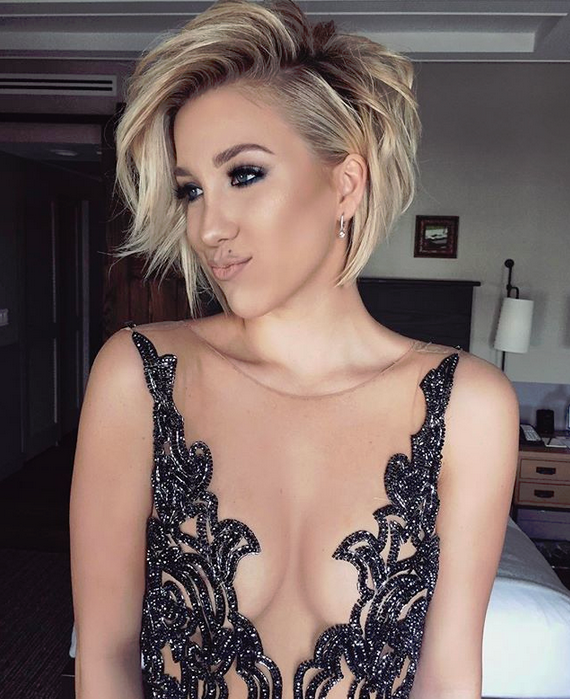