On the new trailer for Teen Mom OG, we were so preoccupied with the faces of the new castmembers and one disgraced ex-governor that we almost overlooked a source of conflict.

It looks like Tyler Baltierra and Catelynn Lowell have hit a major rough patch.

Let’s take a look at exactly what they said, and whether this means that they’re finally headed for divorce.

There was much more in the Teen Mom OG trailer than Bristol Palin filling our hearts with dread.

It looks like there is serious trouble in … we won’t call it paradise … for Tyler Baltierra and Catelynn Lowell.

"If someone asked me, ‘Are you happy in your marriage?’" Tyler’s emotional confession begins.

He provides an answer: "I would say, ‘Absolutely not.’"

Those are some crushing, but honest, words for him to utter.

As powerful as Tyler’s upsetting admission was, Catelynn had a very important question for him.

Catelynn asks Tyler: "Do you think I’m lying to you at all?"

We don’t know what this is about, exactly.

Obviously, both Tyler and Catelynn have really worked on both their mental and physical health over the past year.

But it sounds an awful lot like Catelynn worries that Tyler thinks that she’s lying. Is there suspicion that someone is cheating?

There is so much about the context that we won’t know — can’t know — until we see the episode.

We know that Catelynn received treatment in rehab late last year to deal with suicidal ideation, and then early this year to address childhood trauma.

PTSD can derail your entire life. It’s good that she took action when she did.

Tyler has also been forthright about his struggles with depression, which began when he was only a child.

We’ve also heard about Tyler’s bipolar disorder, which he discusses through poetry.

Many fans had hoped that tackling these issues head-on would help the two of them to beat the odds and stay together.

Of course, some so-called "fans" have been joking that Tyler and Catelynn are going to break up precisely because they’ve been making strides in their health.

Remember when Tyler Baltierra flaunted his weight loss with a new thirst trap? The guy has some serious abs now. He’s turned his torso into a work of art.

But some folks just had to pipe up with their theory that, once he got hot, he was going to cheat on Catelynn or just leave her.

Some even questioned why he would care about having a hot body unless he plans on getting a divorce — as if he and Catelynn can’t both enjoy it.

People made the same kind of joke after Anna Faris and Chris Pratt separated. People can be cruel.

In real life, we know that Tyler and Catelynn celebrated their anniversary just last month.

The couple has only been married for a few years, but they’ve been together since they were kids.

We don’t think that the two of them gushing over each other on social media just weeks ago was an elaborate cover for a secret separation or divorce.

So no, we don’t think that their turmoil in the trailer spells doom for their relationship.

Sometimes, some painful honesty is exactly what people need to express in order to grow and heal as a couple. 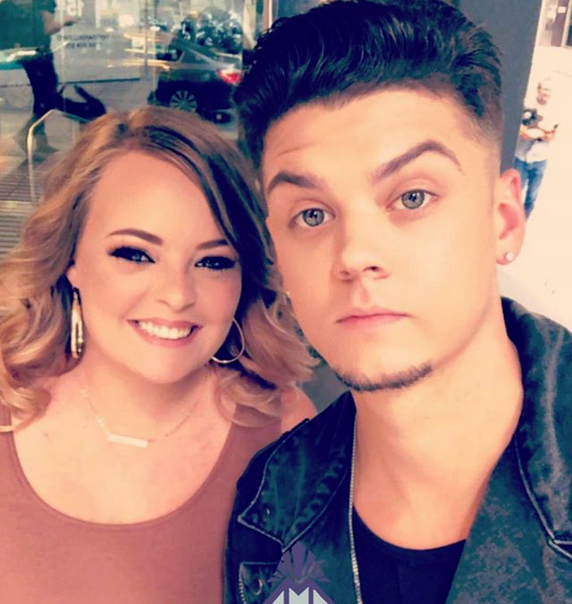