First Daughter Ivanka Trump has reportedly been claiming credit for influencing her father.

First Lady Melania is, according to this report, not even a little amused.

HollywoodLife reports that Melania was amused at best when Ivanka seemed to claim credit for influencing daddy dearest.

According to their source: "Melania thought it was laughable that Ivanka took credit for changing Donald’s mind about the immigrant family separation policy."

After massive domestic and international outcry, Trump did walk back his family separation policy … though countless children are still separated from their parents.

"When in truth," the insider continues. "As far as Melania is aware, she had very little input on the matter at all."

Which leads to the question of whether Ivanka simply believes that she had more influence, or was just trying to make it appear so for the public.

We don’t know the answer to that. And it’s not clear if Melania does, either.

The source continues, describing the relationship between Trump’s eldest daughter and newest wife.

"Melania really doesn’t care much for Ivanka," the insider reveals.

Well, neither do plenty of people. Not everyone gets along with their husband’s family.

"She finds her," the source explains. "To be a little devious and self serving."

That … certainly matches the Trump brand.

"Melania thinks that Ivanka is very much her father’s daughter," the insider claims.

The source explains that shade, saying: "And that in essence she always puts her needs first before all others."

"Congress must now act," Ivanka continued, pivoting the burden from the Executive Branch to the Legislative. "[And] find a lasting solution that is consistent with our shared values."

That’ll be the day, right?

"The same values that so many come here seeking as they endeavor to create a better life for their families," Ivanka’s tweet describes.

"Now that an [Executive Order] has been signed ending family separation at the border," Ivanka concludes. "It is time to focus on swiftly and safely reuniting the families that have been separated."

That process has been slow-going, with reports coming out this week of parents being forced to pay hundreds or even thousands of dollars to fly back the children who were taken from them.

Ivanka allegedly considers herself to have been one of the influences for Trump’s turnaround, which is interesting.

The focus, which man perceived to be deliberately manufactured outrage by people seeking revenge for the cancellation of the Roseanne reboot, surrounded Bee’s use of a c-word (it was not "cookie").

But the actual subject of Samantha Bee’s monologue was about Trump’s controversial immigration policies.

Because Ivanka presented herself as an ally of fellow women during the 2016 campaign, she has repeatedly been a focus for Bee when issues of humans rights and women’s rights come up.

So Bee, when she dropped the c-word, was suggesting that Ivanka actually act like a human rights advocate and influence her father.

Now, this stance by Melania of disliking Ivanka or thinking that she’s ridiculous for claiming undue credit has not been confirmed.

So much about Melania, who speaks less than most First Ladies, is speculation.

But it is certainly easy to imagine conflict and resentment between Melania and Ivanka, and we don’t just mean because of Trump’s creepy comments about Ivanka’s looks.

Though … also because of that.

We don’t know if Ivanka really had any input with Trump.

But the only person we know for sure who has recently exerted influences over Trump (and isn’t a Russian autocrat0 is … Kim Kardashian. 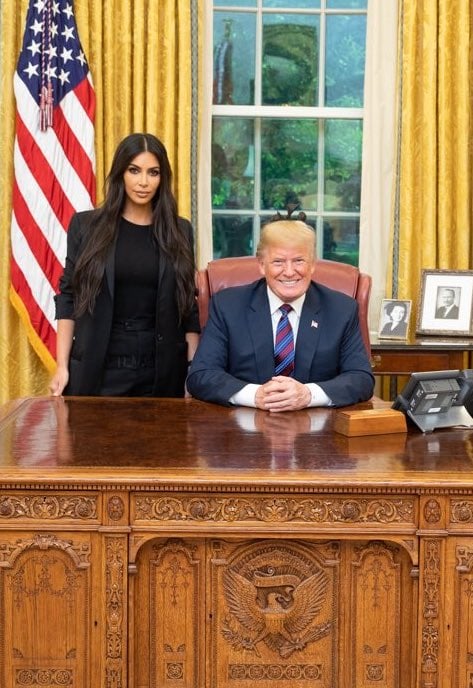