As Arie Luyendyk Jr. and Lauren Burnham’s wedding date looms, a lot of fans — and haters — can’t help but wonder if Arie’s going to change his mind again. It’s not unprecedented, after all.

However, Arie and Lauren sat down with Dr. Ish and Dr. V from Marriage Boot Camp recently.

Those counselors, experts in relationships and the signs that they are doomed, are dishing on what they observed.

(Disclaimer, the Arizona Biltmore is part of the "Biltmore Hotel" chain, and not affiliated with the Vanderbilt family or the actual Biltmore Estate)

People spoke to the counselors about Arie and Lauren’s relationship and what the two experts had observed about the two of them.

"When I see Arie and Lauren, I see a couple who’s both in love and happy to be together."

He continued, pointing out that this was a special situation that bodes well for thier future.

"Which is great for them because sometimes both of those things don’t always happen at once."

That makes sense. Sometimes people who are in love drive each other up the wall.

Dr. Ish continued his assessment, speaking about the nonverbal signals that he had detected between the two of them.

"They held hands and sat close to each other the entire time."

So it doesn’t necessarily take an expert to decipher that they are affectionate.

"That body language says to me that they are literally into each other.​"

So we can’t say that it was a huge surprise to the Bachelor Nation that he didn’t win as huge of a fanbase as some previous stars have during his season.

But until the information first leaked, few suspected that Arie was going to ditch the winner just weeks after he’d proposed to her on camera so that he could go running back to his runner-up.

And no one in their wildest nightmares imaged that Arie would invite ABC’s cameras to witness his cruel breakup from Becca Kufrin.

But he and Lauren seem genuinely happy with each other.

Based upon the assessment by Arie’s ex, Bekah Martinez, it sounds like he weeded out the women who were more assertive.

He settled on Lauren in the end, who was infamous during the season for not having spoken very much in contrast to her fellow contestants.

So it seems safe to say that Arie prefers to take the lead in his relationships. Which … says a lot about him.

It’s really no surprise that Lauren is coming to live with Arie in Arizona instead of the two of them finding a new place to live.

Here’s a question: Does she even know anyone else in Scottsdale who isn’t Arie?

There was a time when Marriage Boot Camp was a show reserved for, you know, couples who were struggling romantically.

These days, it sometimes seems to be about reality couples who want more exposure.

Which could make it a perfect next stop for Arie and Lauren. The Bachelor Nation is huge, and surely at least some of people would tune in, if only to hate-watch.

But this sit-down may have just been a mutually beneficial photo-op and nothing more. Only time will tell.

Besides, at the moment, Arie and Lauren are busy planning their wedding — they don’t really have time to schedule a TV appearance.

Aside from their TV wedding, that is. 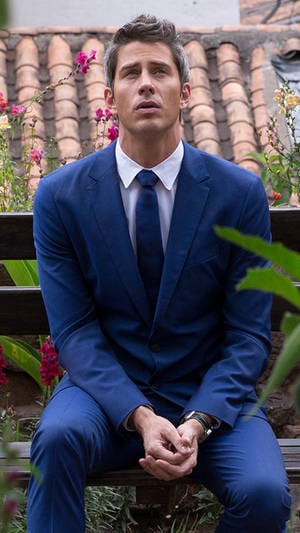