As we all know thanks to an adorable video featuring baby Luna, Chrissy Teigen is pregnant with Baby #2!

That’s wonderful news for her and for John Legend. And, for that matter, for Luna — who will turn 2 this April. And, some time in the next few months, she’ll become a big sister!

Though the pregnant model and social media delight stepped out early (let’s not project our fury over Ed Sheeran somehow winning over much better artists and songs or over Lorde not being invited to perform), she had a treat for fans.

Sharing a photo of herself showcasing her baby bump in a glittering silver gown, Chrissy Teigen added the caption:

"Mama and her baby boy."

Luna’s going to have a little brother!

Technically, this announcement isn’t the first time that Chrissy and John have revealed that Lune would have a younger brother.

The topic came up when Chrissy Teigen defended using IVF on social media after people said some truly vile things to her about not having tried to conceive naturally.

"Hi Linda, thanks for asking, you complete witch. I tried for about 9 years. Anything else, let me know!"

For the record, it literally doesn’t matter if someone doesn’t try, but of course Chrissy and John tried.

Chrissy decided to go ahead and nip the next big debate in the bud.

“Since this is coming up again, I said our next baby would be a boy because that is the embryo we have left. A boy. So. Yeah."

John Legend has also spoken about the couple’s use of IVF, stating simply that they used IVF because traditional efforts to conceive — you know, banging — were not successful.

The technique, in which an egg is fertilized with sperm and then implanted to develop, is controversial in some communities.

For example, some people have a religious objection to some embryos being destroyed in the process, because those microscopic organisms could potentially become human life.

Others worry about a slippery slope. You can choose which embryo to implant, but some worry if it will lead to eugenics. Forget choosing if the embryo has an X or Y chromosome, and think of parents choosing eye color and height and even aptitudes.

Those are fine things to somehow choose for yourself, but troubling for parents to choose.

But none of that means that Chrissy Teigen deserves to be given any grief over it. She’s not producing a science experiment, she’s producing a child.

For some reason, even though Chrissy Teigen and John Legend are absolute darlings, people love to give them a hard time.

Part of that is that the two of them, like any responsible citizens, voice their political opinions and use their platform for good.

Another part of that may be accessibility. Chrissy and John are active Twitter users and engage with followers and replies. Sometimes, that makes trolls want to use that to upset them.

Sometimes, the internet is a treacherous place. Remember when Chrissy Teigen livetweeted her flight from LAX to LAX?

Some truly deranged, disgusting conspiracy theorists tried to use that as evidence that Chrissy and John were "secretly arrested" (what?) and were prevented from leaving the country.

The demented "reason" for their supposed criminal status was being part of some sort of child-abuse cabal that some very paranoid people had imagined for, essentially, any celebrities they didn’t like.

Contrary to what absolute lunatics who listen to Illuminati/pizzagate conspiracy theories might think, Chrissy Teigen and John Legend are great parents to Luna and will make great parents for this new baby, too.

As for Chrissy Teigen ducking out of the Grammy’s early … that’s no real surprise.

It’s better than, say, falling asleep at an awards show. 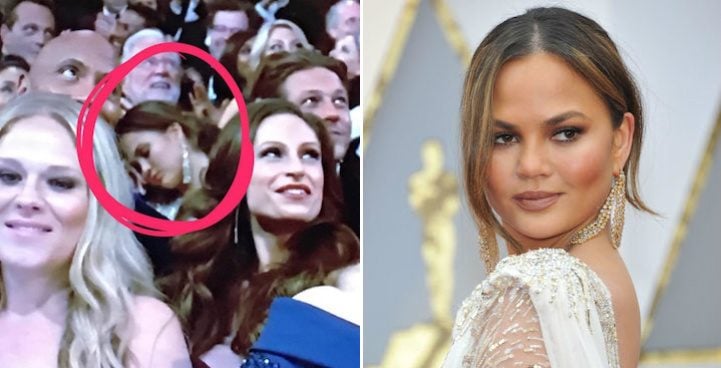