Remember when Kim Kardashian and Beyonce were on friendly terms?

Those were simpler times.

Well it looks like Kim is determined to upstage Beyonce. This time, her weapon of choice will be … her own unborn child. And Kim’s surrogate is already several months along.

So, as you know, Kim Kardashian and Kanye want to have another baby.

Some suggest that this Kimye baby is a play to repair their fractured relationship.

(But if two young children aren’t enough to keep them together, a third sure isn’t going to do the job)

Beyonce’s famous photo with her twins is one of the most iconic images of 2017.

Both before and since then, however, Beyonce and Jay-Z have mostly kept Sir and Rumi out of the spotlight.

It looks like Kim’s next step in her feud with the musical power couple is to do … sort of the opposite.

RadarOnline reports that Kim Kardashian has designs to push her child into the spotlight from the moment of their birth.

(Actually, RadarOnline also reports that Kim’s surrogate is pregnant with Kim and Kanye’s twins, but we absolutely cannot confirm that — though, if true, that is tremendously exciting)

Apparently, Kim Kardashian has been unhappy watching Beyonce enjoy the spotlight with her twins.

Her alleged plan to counter this?

By putting children and their entire life on television.

The claim is that Kim Kardashian is in talks with multiple networks to create a series titled: Meet The Wests that would follow her family around, including her children but also her future newborn.

Kim would then act as a momager, managing the careers of North, Saint, and her unborn child (RadarOnline reports that Kim has already decided on the names of the twins).

There are allegedly multiple reasons behind this:

First of all, Kim and Kanye have reportedly been having problems and there’s a hope that the "project" of creating a show as a family could bring them all together.

This would apparently allow them to maximize the star potential of all of their children.

And, of course, the merchandising and branding that goes with it.

(It sounds like Kim is once again cutting into Kylie’s business, right? Because Kylie has Life of Kylie, now)

And, of course, it might give Kim the opportunity to edge out whatever competition she might see in Beyonce’s children and Beyonce’s family.

Gosh, we hope that this isn’t true.

Sure, it would be all kinds of entertaining, and we love North to pieces.

It’s because of that love, actually, that we don’t want to see her and her siblings pushed into the spotlight any more than they already have been at their tender young ages.

Kim shouldn’t want it, either.

Despite claims tot he contrary, Kim Kardashian doesn’t endanger her children or whatever. She’s actually a pretty good mom.

Kylie became mega-famous when she was, what, a tween?

Look how she’s turned out — whining on reality television about how her dating life makes her depressed or something.

Can you honestly say that Kim should want her children to be reality stars on this level at such a young age? That her unborn child should enter this world on camera and never know privacy? 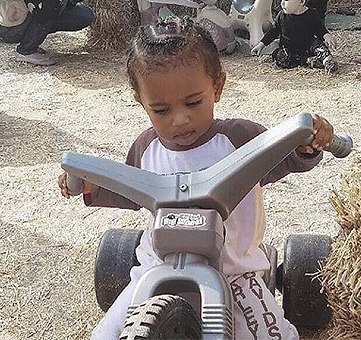