Despite their status as a married couple, Anfisa Arkhipchenko and Jorge Nava have rarely gotten along very well.

In fact, they’ve have been at odds nearly since exchanging vows.

The reality stars rose to prominence on 90 Day Fiance and are now one of the pairs featured on the quasi spinoff 90 Day Fiance: Happily Ever After.

And it all has to do with money.

Or a lack of money, we should say.

Not long after becoming husband and wife, Anfisa claimed that Jorge lied to her about his financial status.

Not only isn’t Nava swimming in gold coins like Scrooge McDuck, he’s actually deep in debt.

On the premiere of 90 Day Fiance: Happily Ever After last month, ​Arkhipchenko stormed out of dinner with Nava.

She did so after learning that he is not the millionaire he claimed to be upon getting to know Anfisa on Facebook.

Over the course of their contentious time on this TLC series, viewers have witnessed Anfifa get physically violent with Jorge on two occasions.

Late last week, however, she shared a caption on Instagram that actually accused her husband of domestic violence.

Just not in the traditional use of this term/accusation.

"Did you guys know that neglecting your spouse and having total control of money(financial abuse) in a relationship is considered domestic violence?" she asked, adding:

"Why aren’t people talking about this? Do Americans have more rights than foreigners when it comes to DV? That’s a serious matter that is being completely ignored.

"Maybe I need to bring more awareness to this."

While this story is still developing, we’re pretty sure people aren’t talking about this because it isn’t true.

But if Arkhipchenko can educate us on the law to which she’s referring, we’re very open to listening.

In a recent scene from the program on which they star, Anfisa turned on Jorge as they sat down to discuss a post-nuptial agreement.

It was the latest example of her acting in an over-the-top, inappropriate manner.

Check out the footage above.

After the married couple argued over splitting everything 50/50 if they were to divorce, Jorge told his wife that she was "too immature" to understand finances.

She responded by raising her hand and slapping Jorge, missing his face and connecting with his arm instead. Yikes!

Jorge has said he fell in love with the Russian model after he saw her photos on Instagram.

After Anfisa moved to the United States, she insisted that Jorge spoil her with lavish gifts, making her somewhat of a villain on 90 Day Fiance.

At various points, Anfisa threatened that she was going back to Russia, but the couple sucked up their differences and got married nonetheless.

It hasn’t been going well. 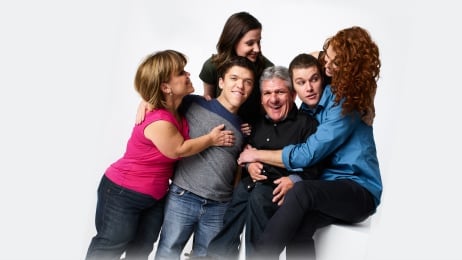