Donald Trump was elected as the 45th President of the United States earlier this morning following a stunning night of 2016 election results.

Victories in Pennsylvania and Wisconsin in the wee hours of Wednesday morning put Trump over the top with 276 Electoral votes.

Trump, a 70-year-old businessman and reality TV star who had never before run for office, will be the oldest man elected to a first term.

After running a divisive campaign, he sounded a note of reconciliation as he claimed victory over Hillary Clinton shortly before 3 a.m.

“Hillary has worked very long and very hard over a long period of time and we owe her a major debt of gratitude for her service to our country."

"I mean that very sincerely. Now it’s time for America to bind the wounds of division," he added. "We have to get together."

"To all Republicans, Democrats and independents across this nation, I say it is time for us to come together as one united people.”

Clinton called to concede just before his remarks.

His win marked the culmination of a campaign that defied expectations, polarized a nation and, ultimately, repudiated the status quo.

Clinton’s quest to become the first female U.S. president in history was thwarted by voters fed up with Washington, and mistrustful of her.

Trump portrayed her, often facetiously, as the embodiment of a rigged political and economic system that had failed the everyday American.

Her credentials were seen not as an asset, but a liability, as the former Secretary of State was cast as the ultimate establishment insider.

The general election, which riveted the country, perhaps turned on the question of national identity more than either of the two candidates.

While Clinton assembled a diverse coalition that she said reflected the nation’s future, it was no match Trump’s self-professed movement.

Millions of Americans alienated by forces of globalization and multiculturalism and frustrated with the ineptitude of D.C. backed him.

In droves. His Electoral College triumph is already decisive and may turn out to be even more so when the final results are confirmed.

Voters convinced that the system is stacked against them, fearful of terrorism and angry about falling incomes gravitated toward Trump.

In him, they looked past a number of personal and professional flaws to see their fearless champion who will re-create a bygone era.

An America unchallenged, facing no threats at home and unfettered by elitist notions of “political correctness” is what Trump promised.

Can he actually deliver that? Needless to say, that’s easier said than done, if not impossible, but America bought what he was selling.

Trump, who has famously promised to Make America Great Again as per his camoaign slogan, said that under his upcoming administration:

“America will no longer settle for anything less than the best.”

He also promised foreign countries that “while we were always put America’s interests first, we will deal fairly with everyone."

“We will seek common ground, not hostility.”

The NYC real estate developer thanked his wife, Melania, and his children for their patience, saying: “This was tough. This was tough."

"This political stuff is nasty and it’s tough.”

The people have spoken, with Trump not only winning but doing so decisively, winning states that had gone Democratic for decades.

Arizona, Alaska, Michigan and New Hampshire are still too close to call and could add to the Republican’s vote total today or this week.

If that happens, it will be the second time in 16 years that a Democratic candidate achieved that hollow victory while losing the election.

What comes next is anyone’s guess, but it can be summed up – regardless of which side of the spectrum you’re on – in just one word:

With Trump’s ascension to the White House, the nationalist wave that has swept through the European Union and the world has hit home.

While it would’ve been foolish to discount his chances, and we certainly did not, no one has any idea what a President Trump will be like.

Even his true believers and probably his own staff have to be somewhat curious, if not concerned, about what will transpire on January 20.

This isn’t an insult, but a byproduct of the sheer unpredictability of his outsider status and brash, unapologetic shoot-from-the-hip candidacy.

It should be … very interesting.

On Wall Street, all three major stock index futures tanked overnight and will open markedly lower when trading begins in a few hours. 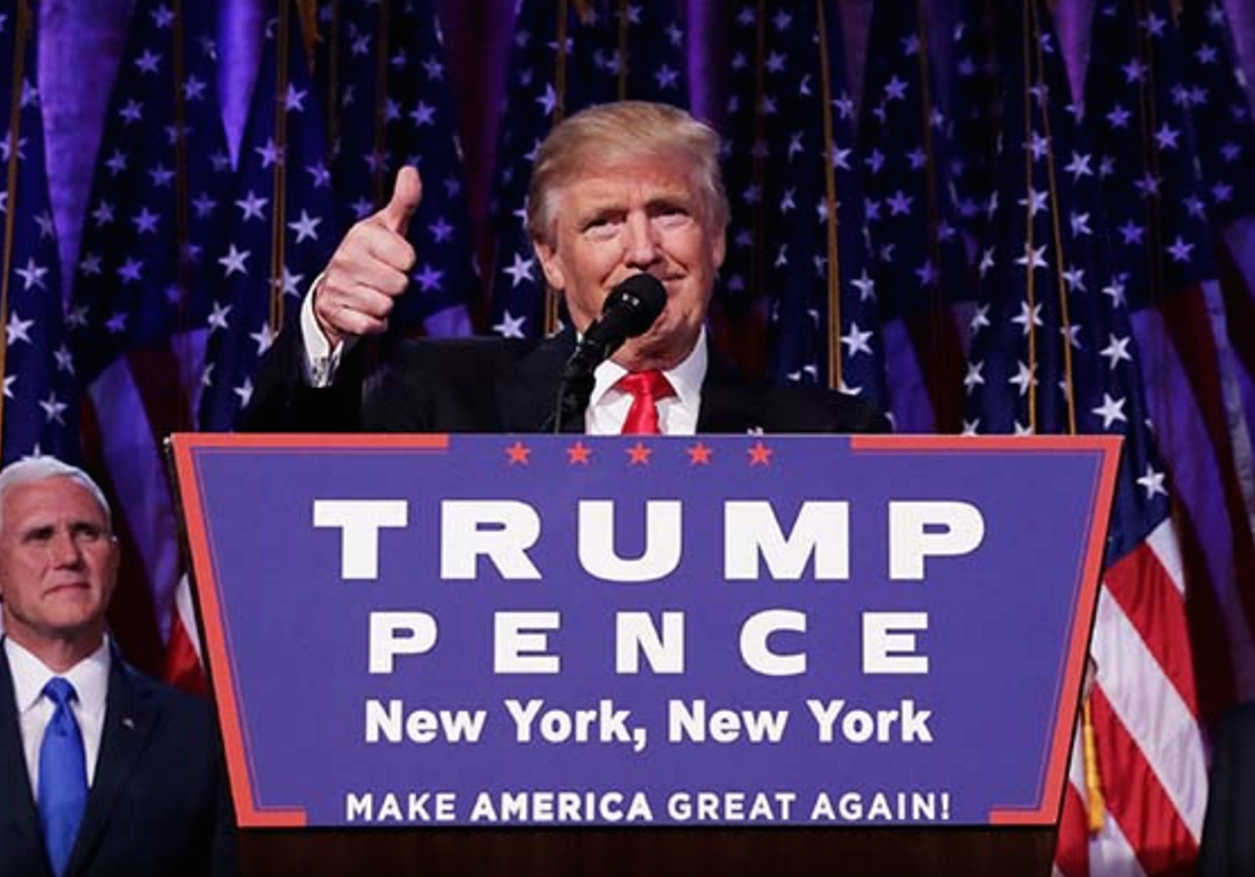 Let’s come together and congratulate and pray for Donald, and the Republic he must now lead … whether he actually wanted the job or not.