You had such a good run there of being quiet, sane and seemingly in love

On Saturday night, the often-troubled actress went on a major Twitter rant against fiance Egor Tarabasov, accusing him of cheating on her…

… and also implying that SHE’S PREGNANT.

The problems actually began on Friday, with Lohan sharing a Snapchat video (captioned "ET phone home") in which she said:

"My fiancé’s being really angry at me, but I’m drinking water to get him to come home. Honey, come home, please."

A day later, Lohan really let Egor having it, posting a number of messages and pictures across Twitter and Instagram.

For instance, she posted a picture on Instagram with her man that depicted his face obscured by scribbles.

"He wore black and I wore white…" she wrote, quoting the 1966 Cher song "Bang Bang (My Baby Shot Me Down)" along with three wise monkey emojis and an anchor.

"I guess #art is whatever you make of it," she added.

Sure. We guess so.

Several days ago, Lohan threw Tarabasov’s phone in the sea, although she later claimed it was just a joke.

She wrote those words as a caption to the following image of the couple:

How did fame allegedly change him in this case?

Shorty afterwards, Lindsay shared a photo of Tarabasov at a party along with the caption:

From there, the former Mean Girls star shared a video that was anything but fetch: it featured her fiancé partying and it included the message:

"Home? First time in my life-bare with he/ he cheated on me with hooker #meangirls #meanboysu b."

An hour later, Lohan tweeted a link to pictures of herself with a baby bump from her 2009 movie Labor Pains, which is about a woman who pretends to be pregnant.

"Lindsay Lohan labour pains trainer – I am pregnant!!" she wrote.

In late June, Lohan said she would definitely consider having kids in the future.

We know: that’s a scarier thought than Jon and Kate Gosselin getting back together to have more children.

A short while after this frightening implication, Lindsay Instagrammed and then deleted an email address and mailing address of the woman she claimed Tarabasov was with, captioning it as follows:

"It’s legal if you’re selling yourself and not a Russian from #moscow right my baby @e2505t."

For some reason, she hashtagged Russian president Vladimir Putin and U.S. presidential candidate Donald Trump with the message.

Obviously. These things are pretty standard when you’re Lindsay Lohan.

In April, Lohan got engaged to her then-22-year-old boyfriend of eight months, who gave her with a five-carat emerald ring at the time.

Now, however, it appears that he’s given her a moderate heart attack.

And, you know, perhaps some sperm to help create a baby. Yikes.

Let’s all cross our fingers and hope for the best, shall we? 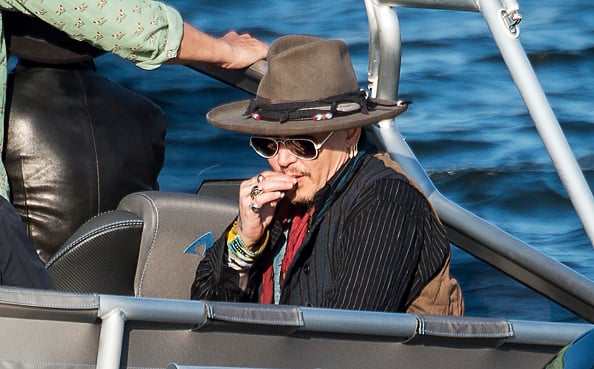 13 Movie Stars You May Never Hear From Again