It’s been over a decade since Brad Pitt left Jennifer Aniston, but still, the relationship remains an endless source of sordid gossip.

It’s a well-known fact that Pitt cheated on Aniston with future wife Angelina Jolie. In the years since, Aniston has become a sort poster girl for jilted lovers.

But until recently, few considered the possibility that Pitt wasn’t the only getting a bit too friendly with his co-stars.

Aniston and Matt LeBlanc worked together for 10 seasons on Friends, and now LeBlanc’s estranged father is claiming that the two of them were more than just, er…friends.

“He got on very good with Jennifer Aniston,” Paul LeBlanc claimed in a recent interview with Radar Online. “They had a relationship…They would make out in the dressing rooms when she was married to Brad Pitt.”

Reps for Aniston have already denied the rumors.

The elder LeBlanc didn’t get into detail with regard to the seriousness of Aniston and LeBlanc’s relationship, but he did share some other juicy secrets from the set of the iconic sitcom.

Apparently, LeBlanc found co-star Matthew Perry to be smug and obnoxious (Could he BE any more annoying?), and he regarded David Schwimmer as a colossal bore (news that should surprise exactly no one.)

Paul went on to describe his son as a “wild and reckless” egomaniac who “drinks like a fish.”

“He’s not that ‘Joey’ that everyone loves,” LeBlanc says. “On TV he’s a loving man, but on reality he’s not.”

Ouch. We’re guessing Matt will not be there for his dad when the rain starts to pour. 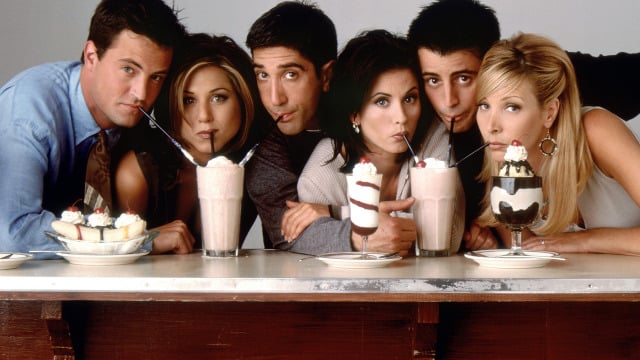 Friends Cast: Then and Now