Not everyone could get away with photobombing a picture of Meryl Streep, but not everyone is Benedict Cumberbatch, who was up to his old tricks last night.

See him ruin (or awesome-ize) Michael Keaton’s photo of her here:

Keaton’s intended shot of Streep – posing with Margaret Cho, dressed up as North Korea’s leader Kim Jong-un – would’ve been plenty amusing on its own merit.

Topping it off with Benedict Cumberbatch photobomb, though? Epic.

The classic moment occurred during the Golden Globe Awards monologue, when hosts Tina Fey and Amy Poehler were riffing on the Sony hacking scandal.

They roped Streep into it, with the use of Cho in full dictator garb. Meryl gamely played along, while unbeknownst to her, Benedict prepared his sabotage.

It’s not Cumberbatch’s first photobomb, as he infamously pulled a similar move on Bono and U2 at the 2014 Academy Awards, but it may be his best.

The 38-year-old married actor, who is expecting with his wife, the pregnant Sophie Hunter, made for one of the best moments of last night’s show.

The others? See below for more GIFs from the 2015 Golden Globes: 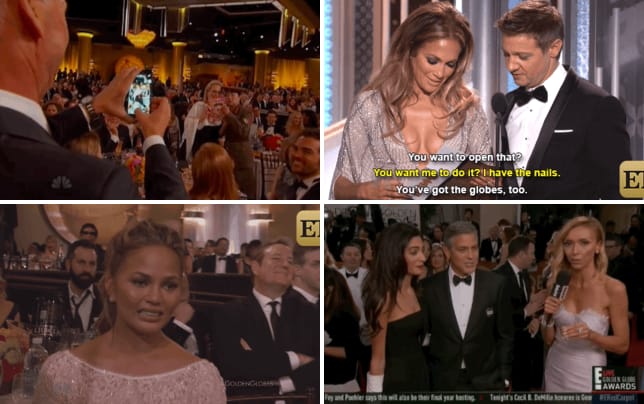