Just three years ago, Peggy Suhalian was fired from RHOC. Fans breathed a sigh of relief.

Now, she’s speaking up to slam Shannon Beador. Does she have a point?

On November 24, Peggy Suhalian was a guest on the Poplitically Incorrect podcast.

“Shannon is a lunatic,” she accused of her former castmate.

“[I] remember her saying, ‘Let [Peggy] take her 100th Housewife tag to her grave,’" Peggy recalled, seemingly mistaking the line for a death wish.

"So really, you want me to die, and then when my kids don’t have a mother…" Peggy, misunderstanding the expression, continued.

"What if I say that to you? What about your children?" she asked.

Peggy then remarked: "I can’t imagine saying that to somebody.”

“She needs to be on meds, especially to calm her down," Peggy declared about Shannon.

But Peggy does add that she thinks that there is a method to Shannon’s on-screen madness.

Peggy speculated that Shannon acts out for the camera because “she needs a paycheck.”

“She’s divorced. She needs to stay on, she’s been on for a while, she knows the game, she plays it right," Peggy suggested.

Recent on-screen drama with Shannon has involved a feud with Gina Kirschenheiter.

Shannon strongly denies calling Gina’s house "sad" and "small" … even though none of her castmates have any doubts.

But Peggy says that she, too, believes that Shannon said it.

“When she walked in, her face was sour," Peggy observed.

She characterized Shannon’s reaction: it was just very sour, and that’s not right."

A number of Housewives shows have injected much needed, long overdue racial diversity into their lineups.

“Diversity is good," Peggy remarked, "because you get to see different ethnicities and different lifestyles and stuff like that."

Continuing to prove that a broken clock is right twice a day, Peggy then added: "a mixture is good."

But she feels that the ladies of Orange County have yet to catch up.

"Right now I feel like they’re all the same and there’s no substance," Peggy accused.

"And," she continued, "they’re just causing the drama."

"They’re all renting homes," she accused. "They all pretend they have money.”

For the record, online estimates put Kelly Dodd well ahead of Peggy’s net worth, and Shannon even further. Both are renters. Peggy’s hangup about renting doesn’t translate to bank accounts.

Braunwyn Windham-Burke has been struggling with her castmates after coming out as an alcoholic, and Peggy claims to be scandalized by their reactions.

“I would be on Braunwyn’s side because I’m more sincere," she claimed.

"And that’s like a deep situation, if you’re an alcoholic," Peggy remarked.

"I would be on Braunwyn’s side," Peggy reiterated.

"And I would tell the girls," she continued, "you know what, the girls are just insincere and why would you do that?"

"Why would you do such a thing like that?" Peggy asked. "Be understandable."

“She said she’s an alcoholic, isn’t that good enough? And she’s crying for help," Peggy remarked.

“I would be the one to hug her and to be next to her and to understand her situation,” she claimed.

Peggy starred on only one season of the hit Bravo series … which brings us to our conclusions.

First up, Peggy seems to be speaking about a fantasy of what she would do if she were on the show.

She may be trying to angle for a role on the next season — perhaps as a supportive friend to Braunwyn on her sobriety journey.

Braunwyn is one of the most interesting, dynamic, and unexpected new stars to join the show recently … friendship with her could land someone an Orange.

That said, we have trouble envisioning Peggy hugging Braunwyn and being by her side.

Why? Because Peggy’s alleged homophobia was a major factor behind why fans wanted her gone from the show in the first place.

Anyone who has her own brother removed from their parent’s funeral because he’s gay does not get to have a reality TV platform. 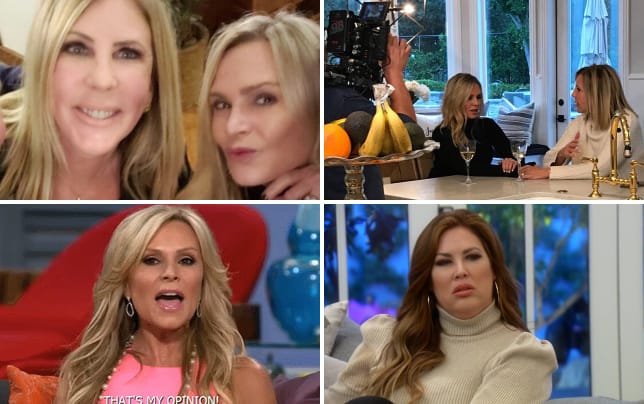